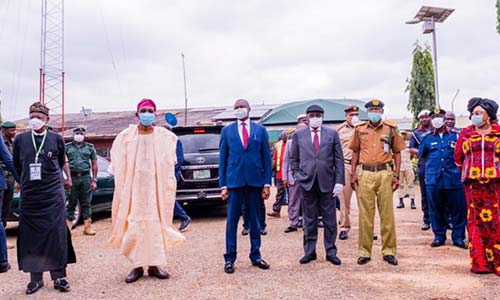 The Presidential Advisory Committee on the Prerogative of Mercy (PACPM) on Tuesday, reconvened to look into 320 applications seeking presidential pardon and clemency on behalf of some convicts in custodian centres across the country.

Speaking at the meeting held in Abuja, the Attorney General of the Federation (AGF) and Minister of Justice, Abubakar Malami (SAN) said the committee, constituted in June 2018 was principally to assist the president in the discharge of his constitutional duty of granting pardon and clemency to convicts or ex-convicts.

He said the committee, of which he is the chairman will look at the applications and advice appropriately, based on facts, just as he charged members to carry out their assignment objectively in the interest of justice.

Malami said since the committee submitted its report and went on recess, his ministry has received 320 applications seeking presidential pardon and clemency on behalf of some convicts in custodian centres across the country.

After the presidential pardon, he said, ex-convicts will be reintegrated back into the society in line with Section 175(1) of the 1999 Constitution of the Federal Republic of Nigeria, as amended.

The minister reiterated the Federal Government commitment to the ongoing justice sector reforms and efforts geared toward decongesting the nation’s correctional centres within the ambit of the law.

Also speaking, Minister of Special Duties and Intergovernmental Affairs, Senator George Akume, stressed the objective of the committee, which he said, include interviewing, selecting and determining convicts and ex-convicts to be granted pardon for onward recommendation to the National Council of State headed by the president.

He said the reconvening of the committee would bring about a drastic reduction in the population of inmates in the country’s correctional centres.

“I want to urge you all to tread with caution while investigating inmates in order not to release unrepentant criminals back into the society and thereby causing more social problems in the country,” he said.