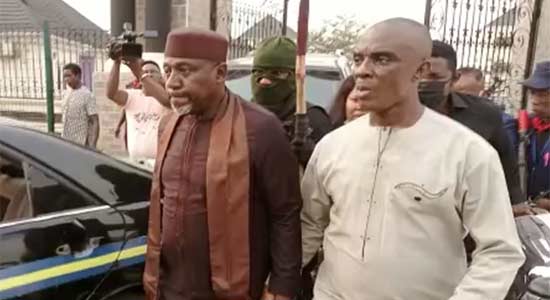 The police on Sunday arrested a former Imo State Governor Rochas Okorocha for allegedly breaking into a sealed property belonging to his wife.

He will be charged on Monday, police sources said.

Okorocha was still in custody at the state police command as of 10 pm.

He was asked to write a statement, but the former governor insisted that the state officials must leave.

The former governor was accused of forcing open the Royal Spring Palm Estate sealed by the state government.

Accompanied by his son in law, Uche Nwosu, the Senator allegedly broke the keys in a bid to recover the property belonging to his wife Nkechi.

Loyalists of the state government were said to have confronted them. One person was injured in the ensuing melee.

The government, on Friday, recovered the estate along Akachi Road belonging.

Commissioner for Lands, Enyinnaya Onuegbu, said the seizure complied with a gazette on the report of the Judicial Commission of Enquiry on Recovery of Lands and other Related Matters.

Okorocha, who was led into a sienna vehicle by policemen, was driven to the command at about 5 pm.

Commissioner for Information and Strategy, Declan Emelumba, said the former governor took some thugs to the estate and forcefully broke the government seal to gain entry into the estate

He confirmed that the Senator representing Imo West would be arraigned today.

“We discovered that Senator Okorocha allegedly led some people to the place sealed by the state government. This generated unrest and some youths from Owerri stormed the place.

“Right now he is in our custody and the Commissioner of Police has directed a full-scale investigation into the incident.

“If found culpable, he would be prosecuted according to the provision of the law,” he said.

It was gathered that about 12 vehicles with which the senator and his supporters went into the estate, were destroyed.

The tyres of the white Hyundai Bus in which Okorocha drove into the premises were flattened with their windscreens shattered.

His orderly was also seen in a pool of his blood. He was said to have been shot in the head; others said he was stabbed in the chest.

Okorocha was said to have forcefully pushed away security vehicles mounted in front of the entry to guard against trespassers and destroyed the padlock that sealed the property and moved in with his men.

Social media consultant for the Imo state government, Mr Ambrose Nwogwugwu, alleged that the former governor led armed thugs and “destroyed and vandalised security vehicles and broke into the property of the Imo State government”.

While Okorocha and his group were still there, Mr Chinasa Nwaneri, Special Adviser to the Governor on Special Duties, mobilised and led another group of thugs loyal to the governor to enforce the sealing of the property.

One of the aides of the senator, Onwuasoanya Jones, said his boss did not break into the Royal Palms Apartments.

“He was there to forestall a total breakdown of law and order by prevailing on his numerous supporters and ordinary citizens of Imo State who had gone there in protest against the state government’s forceful takeover of the property not to take laws into their hands.

“As a former governor and a current Senator, the philanthropist understands the processes of seeking redress when hurt by the government.

“I can assure you that officials of the state government might have planted the story of him breaking into the property to malign him.

“Had he been a believer in violence or any sort of self-help, there would have been a bloodbath, because Okorocha remains very popular in the state as against Hope Uzodimma whom Imo people detest his very sight.

“Some Imolites were spoilt to unleash mayhem on agents of the state government and thugs hired by the governor to attack Okorocha, but as a statesman, Okorocha stopped them from fighting back, even when the hoodlums sent by Governor Uzodimma had physically harassed aides of the governor, including firing gunshots at some.”

“They attacked and damaged all the vehicles in his convoy. They also attacked his aides.

“Senator Okorocha was with only his aides when the thugs unleashed the attack.

“If he had expected the attack, he would not have moved with his aides alone; he had never been a violent man all his life.

“This planned attack is unprovoked and unwarranted. It has opened a new but ugly chapter in the politics of the state.”