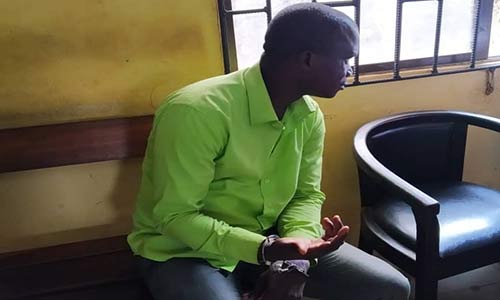 He pleaded not guilty to 3 count charges consequent upon which he was admitted to bail.

Adekunle Adegboye was admitted to bail in the sum of 200,000, 2 sureties, who must be resident in Lagos, one of which should be a civil servant, to show a letter of employment, payslip, and Identity Card.

The other to own property in Lagos, to submit CTC of title documents same should be verified, evidence of 2yrs tax clearance with Lagos state government for the two sureties to be confirmed by Lagos internal revenue

He is to be remanded in Kirikiri pending perfection of bail.

He was arrested for impersonating as a lawyer. TheNigeriawayer has earlier reported that the alleged imposter operated with a seal which he printed from a business centre, and claimed to be working with one Glory Q A. & Associates when luck ran out of him.

Mr. Adekunle Adegboye who has practiced as a lawyer for several years was arrested alongside his cohort, a 65 years old Estate Agent whom he described as a long-time client of his.

During what seemed to be a stormy interrogation, Mr. Adekunle Adegboye voluntarily confessed to have been in this dubious habit for an upward of two decades as he claimed his legal services are not just limited to issuance of statutory notices, deeds, L/A but also have tasted a few high profile cases in the course of his legal practice.

The interrogation continues while preparations are ongoing for an immediate arraignment.

Leke Ariyo Esq. represented the Fake lawyer. The IPO in the matter is Bamiteko Abiodun. Members of the Nigerian Bar association from Ota branch and Ikeja branch respectively held watching with the team led by Messrs Basil Owolabi (Finsec Nba Ikeja), K. E. Umana, from NBA Ota Branch and a host of other lawyers from Ikeja present to witness the trial.

The matter was adjourned to 13th January 2020