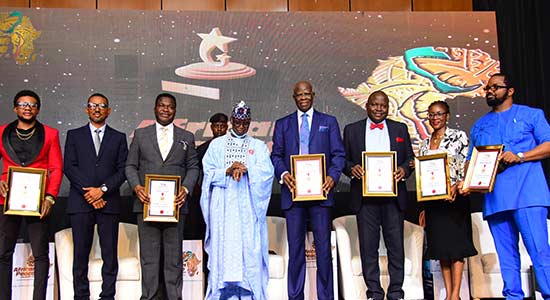 They received the awards at a ceremony organized by African Peace Magazine UK at the Nicon Luxury Hotel, Abuja.

The retired Justice of the Supreme Court, Hon. Justice Suleiman Galadima, who was also one of the awardees and the Board Chairman of the Magazine, called on the leaders of the continent to initiate and launch strategic plans that will bring the continent the desired peace and development in a welcome address at the event.

The goal of the award, according to the Honorable Judge, was to recognize individuals and institutions that have contributed to the establishment of peace on the continent in some way.

In his welcome remarks, the Honourable Judge urged for the formation of training programs targeted at disseminating progressive African principles in order to improve peace in Nigeria and across the continent.

Aliyu Abdullah, Senior Special Assistant to the President on Media and Publicity (Office of the First Lady), who accepted the award on behalf of Her Excellency Dr. Mrs. Aisha Buhari, expressed gratitude to the African Peace Magazine UK.

Aliyu Abudllahi speaking on behalf of the first lady commended the Management and Organizers of the African Peace Awards for their initiative on launching strategic plans to introduce the desired peace and development in the continent and in Africa Particularly. He praised the African Peace Awards Management and Organizers for their initiative in initiating strategic initiatives to bring about the desired peace and development on the continent and in Africa specifically.

Mr. Paul Kanu, speaking on behalf of the SGF, said that despite the continent’s socioeconomic woes, African youths have used their artistic talents to promote peace and solidarity. He stressed the importance of making a coordinated effort to promote peaceful cohabitation on the African continent.

In her thank-you address, Ambassador Olufolake Abdulrazaq, the first lady of Kwara State, asked African media to report on the continent’s breakthroughs, potential, and creativity rather than continuously concentrating on wars, famine, and underdevelopment, which depict the continent in a negative light to the rest of the world.

“No fewer than 15 African countries are currently engulfed in crisis due to absence of peace,” the career diplomat stated, adding that the affected countries’ economic and social progress has been significantly hampered. To bring perfect peace to the African continent, the First Lady advocated for true healing and conflict settlement.

A panel of six was introduced at the ceremony, and the panelists explored various issues of peace. One of the panelists, Chief Akin Olujinmi SAN, former Attorney General and Minister of Justice, stated emphatically that Africa is not ready for peace at this time. There can never be peace, according to the legal luminary, unless ethnicity, tribalism, and religious intolerance are abolished. “collectively we must pursue peace,” he stated.

Another panelist and award recipient, Chief. Jubrin Okutepa SAN, stated in his submission that Nigeria’s greatest problem is a complete disregard for the rule of law and due process. He went on to say that the country cannot progress until the law is followed. “There is a complete psyche of impunity. Nigeria is in a state of nature. Until we respect rule of law and there is a sanction, Nigeria will continue to be in crisis”, he stated.

Noah Ajare Esq., the Editor in Chief of African Peace Magazine, remarked in his appreciation speech that peace can only be realized if we all want it. We must express love in the simple things we do on a regular basis. He underlined his commitment to attaining peace in Africa, particularly in light of the economic consequences of Covid. He ended the celebration by expressing his heartfelt gratitude to his family, team, special guests of honor, and everyone else who helped make the event a huge success. The success of the African Peace Awards 2021, he said, serves as a reminder to him and everyone else that when we work together, we can achieve great things. It is possible to achieve long-term peace.

Mr Noah Ajare Esq, Editor in Chief of African Peace Magazine UK, extended his gratitude to everybody who helped make the occasion a success. He stated that the organization will continue to recognize and honor individuals who have contributed to the Nigerian and African peace processes.

Despite all difficulties and challenges, Ajare assured that the organization would maintain the flag flying and continue to grant the yearly award.