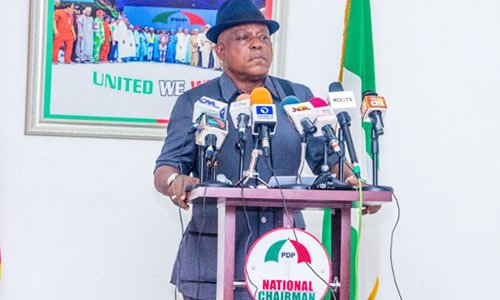 National Chairman of the Peoples Democratic Party, PDP, Prince Uche Secondus has said the alleged fear of insecurity and intimidation of judges raised by the Nigeria Bar Association, NBA, vindicates PDP’s position that the ruling All Progressives Congress, APC, is using devious means to obstruct justice from coming out from the nation’s courts.

The umbrella body of lawyers in the country through their president, Paul Usoro SAN, in a speech on Thursday and which was unanimously adopted by the National Executive Committee of the Association, alerted the nation that ” the level of insecurity in the country and the attack on the independence of the Judiciary and the legal profession constituted a threat to the rule of law and by extension the country’s democracy”.

The NBA boss said that the climate of fear instilled by the Federal Government undermined the independence of the judiciary and the ability of judges to act confidently without fear or favour in dispensing justice as they are purportedly threatened, intimidated and blackmailed by mostly the executive arm of government and their agencies at the federal and state levels.

Secondus, who reacted in a statement on Sunday by his spokesman, Ike Abonyi, said the “PDP has continuously raised alarm at the gradual erosion of the doctrines of Separation of power by the APC administration as the nation watch helplessly as the executive continues to muzzle the other arms of government including even the press”.

He added that the opposition has remained resolute in crying out loud against harassment of those with opposing views because it clearly envisages the danger of concentration of power in one hand especially with ‘a leader who has no history of appreciating and respecting democratic tenets and principles’.

The National Chairman however expressed hope that even in the face of harassment and intimidation, the Nigerian judiciary knowing their critical position in the sustenance of democracy in the land and being citizens who are resident in the country, know that the judiciary is the last hope of ordinary people and that no nation grows on injustice.

Meanwhile, Secondus has condoled with the people of Kom Kom in Oyigbo local Government Area of Rivers state who lost their lives at the gas pipeline explosion that killed dozens of citizens when Shell Petroleum Development Company, SPDC, were carrying out routine maintenance of the facility in the area.

“Our hearts are with you at this trying times,” Prince Secondus said while lamenting the incessant hazard of the people of the Niger Delta due to the neglect and insensitivity of the federal government to listen to the cries of the people.

He also commiserated with victims of the senseless killings in Zamfara and other states in North West and the North East zones.

The opposition leader charged the relevant authorities including the oil and gas companies to show some sensitivities to the plight of the people of Niger Delta on the health hazards they are exposed to as a result of exploration of their God-given natural resources.