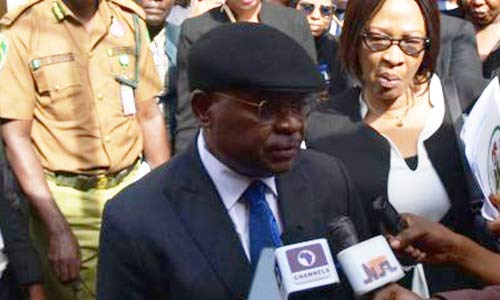 The Chief Judge (CJ) of the Federal Capital Territory (FCT) High Court, Justice Ishaq Bello has identified paucity of fund as one of the major challenges that hamper justice delivery in the country.

Justice Bello who stated this in an interview on ARISE NEWS Channel, a sister broadcast arm of THISDAY Newspapers, noted that if the justice sector must perform optimally, government at all levels must show commitment in the provision of necessary funding.

The CJ who commended major actors in the sector such as the police, the judiciary and the correctional service for performing well in the face of the limited resources at their disposal, however called for some radical reforms in order to move the sector forward.

“Against the background of challenges faced by the government apparatus that is the police, the court and the Correctional Service, I will say they have done well in the discharge of their mandates. I repeat, against the background of challenges, because the three require intensive investment in terms of provisions of the wherewithal to either conduct investigations that is referring to the police department or any agency.

“A lot of provisions are required in terms of logistics, scientific apparatus, forensic lab and many other related things for them to perform optimally.

“In the face of paucity of funds, challenges are enormous and they can only perform within the availability of funds and what such paucity of funds can provide in terms of enabling environment for effective performance. The same explanation applies to the judiciary for the purpose of discharging adjudicative responsibilities.

On how paucity of funds affect justice delivery in relation to the Correctional Service, Justice Bello noted that the court may be ready for trial but the defendant is not available due to some logistics and other challenges faced by the service in producing the defendant in court.

Justice Bello however disclosed that for the country to improve on justice delivery in the country there is the need for urgent reforms, particularly of the courts and the various laws guiding court’s proceedings as such laws according to him, are not only obsolete but are relics of colonialism.

“Some penal provisions cannot meet the challenges of the moment; they are inadequate.

“There is the need to review a lot of the substantive and procedural laws that operate in guiding the justice delivery system and bring them up to international standards,” he said.

While identifying issues such as Holding Charge and Trial-Within-Trial as some of the areas needing urgent reforms, Justice Bello disclosed that he is currently drafting a new Practice Directions to address the issue.

The Chief Judge which is spearheading many reforms in the judiciary, also disclosed of plans to adopt a court sharing system like in other climes where judges share court in the discharge of their duties in order to reduce cost.

He lamented the poor conditions of the nation’s courtrooms as well as working conditions of some judges which according to him impact negatively on their health after retirement.

Speaking on the issue of conflicting Judgments by courts of coordinate jurisdiction, Justice Bello said that Judges most times should not be blamed as they may not be aware that a brother judge is on the matter or has already given judgment, adding that if lawyers refused to divulge information there is nothing anyone can do.

He however disclosed that to tackle the situation, he introduced a new Practice Directions in the FCT High Court that bars judges in the jurisdiction from entertaining political cases that emanated from states other than the FCT.