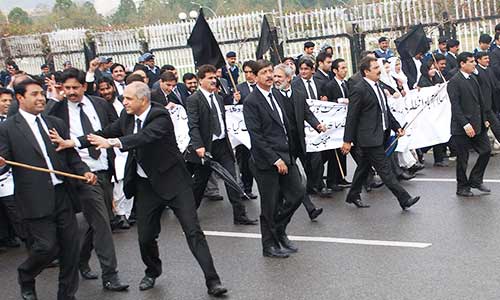 ISLAMABAD: Lawyers from bar councils across the country staged a protest outside the Supreme Court (SC) on Friday and burned copies of references filed by President Arif Alvi against SC Justice Qazi Faez Isa and Sindh High Court (SHC) Justice KK Agha over non-disclosure of foreign properties in their wealth statements.

According to reports, Attorney General Anwar Mansoor, who had received a notice from the SJC to appear as a prosecutor, persuaded the council to begin formal proceedings into the matter. If the council is convinced by Mansoor’s arguments, it will issue notices to the judges, asking them to furnish replies to the allegations levelled against them, or it may decide to drop the proceedings.

As the SJC proceedings started, Supreme Court Bar Association (SCBA) President Aman­ullah Kanrani and other lawyers burnt copies of the references. Banners with slogans against the two references and demanding their withdrawal were put up on walls of the SC building.

“Our voice is suppressed,” Kanrani said at a press conference, adding that the unity between the SCBA and Pakistan Bar Council was visible for all. “Today, lawyers from across the country showed solidarity [with their protesting fellows].”

“The PBC has constituted an action committee and we are all bound to obey its decisions.”

Lawyers’ leader Ali Ahmed Kurd claimed that the lawyers could not be defeated.

“This partial democracy is intact because of us,” he said, adding that it was not only an issue of a judge but of the entire lawyers’ fraternity and people.

“I warn [the government] that the reference[s] are based on mala fide intentions,” he said, insisting that the protesting lawyers’ viewpoint on the issue was valid.

“You [the government] want to deliver a message to other judges and we are here to refrain you from doing so.”

He said that judges should be free in making their decisions and Justice Isa was such a judge [who is free in his rulings]. He also warned of a lawyers movement from Peshawar “which no one would be able to halt”.

He regretted that “a small group of lawyers, on someone’s whims, was attempting to sabotage the strike”.

Meanwhile, five benches of the apex court continued their functions as per routine.

Members of Quetta’s legal fraternity staged a protest demonstration at the Balochistan High Court (BHC) against the reference. They chanted slogans against what they described as the punishment of Justice Isa for his stance.

They claimed the reference was equivalent to pressuring judges with regards to delivery of justice.

LAWYER GROUPS DIVIDED:
On Thursday, a group of lawyers associated with the Punjab Bar Council (PbBC) had distanced themselves from the strike called by the PBC.

Groups of lawyers belonging to Sindh and various bar associations of Punjab had also opposed the call given by the PBC ─ the apex regulatory body of lawyers ─ for a countrywide strike.

Earlier this week, the bar councils — including the PBC, PbBC, Sindh Bar Council, Khyber Pakhtunkhwa Bar Council, Balochistan Bar Council and Islamabad Bar Council — unanimously demanded the withdrawal of the references since they were based on mala fide intentions and were filed without adhering to the mandatory provisions of relevant laws.

The Lahore Bar Association had also disassociated itself from the strike call. The body held a meeting on Thursday, after which a press release was issued, stating that the LBA had voted on and passed a resolution in favour of SJC pursuing references against the judges. The statement called for a speedy trial of the judges.

The Lahore High Court Bar Association had also held a meeting on Thursday to discuss five resolutions on the matter of the reference against Justice Isa but, according to a statement issued by the body, a ruckus ensured that the meeting was inconclusive.

LHCBA Secretary Fayyaz Ahmed Ranjha in a statement said the meeting had fallen prey to mismanagement. He added that, if needed, the resolutions would be tabled again on a suitable occasion. He said that no notification had been issued with respect to a strike on June 14.