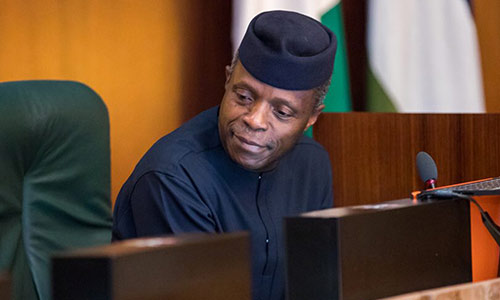 The population, they warned may double in the next few years with adverse effects on available infrastructures and facilities.

They spoke during the valedictory session of the National Economic Council (NEC) at the State House, Abuja.

Osinbajo also called for condemnation of those involved in hate speeches in the country.

Nigerians, he said, should not take lightly those capable of causing crisis in the country through their utterances.

He urged the governors whose tenures are coming to end nit to spend their lives sleeping outside power.

Osinbajo said “The privilege of executive leadership at this level is the one only few of us will ever have. When I say few of us, it is few of us in our nation I have said at a previous forum, 36 governors and their deputies, one President and one Vice President we will be 74 in all men and women of a nation of 200 million. It is on this elite group that the destiny and future of all our people rest.

“In the next few years our population will double with the attendant challenges of jobs, education, health care, security and infrastructure. Every nation that has move its people from misery to prosperity has depended heavily in fact almost completely on the political elite.

“Our people have nowhere else to look or to go, it is as they say, at the collective table that the bulk stops.”

Speaking on those involved in making hate speeches in the country, Osinbajo said “Many of us have led our states for these many years, no one needs to advise us on the importance of unity, on importance of tempering utterances with wisdom, with moderation and conserve expressing concern for those who are the usual victims of the conflicts that are caused by hate speech, the conflicts that are caused by careless and reckless statements.

“The ordinary Nigerian has no problems with his brothers and sisters of different tribes and religions, they share the same issues, they just want a decent existence, they want food on the table, they want good shelter and security of lives and livelihoods.

“Unfortunately and frequently our political elite sometimes out of advancing political agendas or simply seeking relevance recklessly stoke the fires of ethnicity and religious conflicts.

“We as leaders have a duty to keep the peace and welfare of our states, we must not only we rise above the temptation to take advantage of our country’s fault lines, we must definitely condemn and restrain those who do so. We must insist that this country truly belongs to all of us especially those who cannot defend themselves.” he said.

He advised the governors to use their influence and reach to the advantage of Nigerian people.

“So I think that we can help in one way or the other, we can do something in our states and other states in a way of advocacy or action on education and health care in particular and jobs.

“I think is important for those of us who have had the benefit of all of these experience and leadership not to now settle down to a life of business or perhaps of enjoyment or sleeping for eight hours. I need this time for action.” he added

He thanked the governors for the kind and generous comments made about the outgoing NEC team.