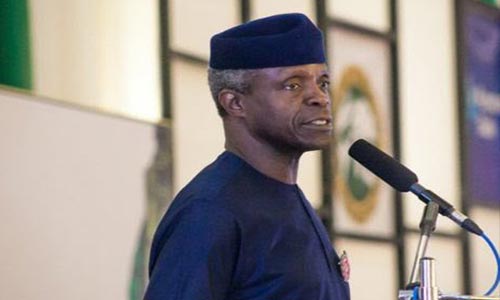 Vice-President Yemi Osinbajo has assured Nigerian traders in Ghana that they would get justice.

Osinbajo, who gave the assurance on Tuesday evening during a meeting with representatives of the Nigerian community in Ghana, said their well-being was the federal government’s concern.

A statement issued yesterday by the vice-president’s spokesman, Mr. Laolu Akande, said the meeting focused on the challenges facing Nigerians living in Ghana, including the Ghanaian authority’s recent decision to shut down Nigerian businesses in the country following their inability to pay the unwarranted $1 million slammed on them.

Akande said Osinbajo while responding to the issues raised by leaders of the Nigerian community at the meeting, particularly complaints of maltreatment by Ghanaian authorities assured them of the federal government’s commitment to deal with the issues thoroughly.

“I will certainly convey the depth of your grievances to the president. I am sure that he will be deeply disturbed to hear that despite the assurances that he had received, (from the Ghanaian government) there are still problems and complications,” he said.

He said Osinbajo told the meeting that the delay in resolving the issues might have been caused by bureaucratic bottlenecks.

He, however, promised that machinery would henceforth be put in place to resolve the matter.
“I look forward to getting the details and making sure that we are able to begin to resolve some of these issues as quickly as possible. But I think you must also recognise that generally speaking, governments tend to be very slow.

“Processes are slow, bureaucracies are slow, but we will make sure that we do the very best we can to get you your rights so that at least, you are dealt with justly,” he added.

Speaking on the efforts made in the past and even recently to resolve the crisis, the Vice President said: “I have followed closely developments here, and many of the incidents that you have described, I am already very familiar with. As a matter of fact, the President had asked that a review of all that had taken place be done.”

“There have been direct communications between our President and President Akufo-Addo. Our President has spoken to him about this, he has made a formal complaint to him, and that conversation has been going on. What the Ghanaian government pledged to do, on three occasions, was that the shops will be reopened. In fact, I am a bit surprised that it has not taken place because my understanding was that, that was going to be done.

“So, I think what we need to do aggressively is to follow-up with the Ghanaian government and to see that these things are done.

“I am sure you are familiar with the fact that there was a meeting between the Minister of Trade and Industry of Ghana and a team led by our own Minister of Industry, Trade and Investments in Abuja. That took place on September 3, while the Hon. Speaker of the House of Representatives, Femi Gbajabiamila was meeting with his counterpart here.

“Now, it is very evident from what you have said here that there is so much that had gone wrong over a long period of time and we really need to address these concerns in as detailed a manner as possible. And what I can say to you is that this is a matter that concerns the government very greatly…your welfare concerns us greatly.”

He, however, urged all affected traders through their associations and leaders to submit a more detailed letter containing the number of affected shops and other relevant information that would enable the Nigerian government follow-up effectively their Ghanaian authorities.

“Perhaps, it might be important if we have specific details of the shops that need to be reopened, so that we can check and say how many (I think that at some point we had a list of about 160 or so, shops). So, I think we should have a list of specifics so that even if we are told that something has been done, we can cross-check and see to it that it has actually taken place.”

The Vice President then urged Nigerians living in Ghana to remain law-abiding and to embrace peaceful coexistence, while adding that both governments would resolve the differences.

“I think that is up to us now, to our two governments, and to those of you who live here and Ghanaians who live in Nigeria, to ensure that we are able to bring about peace and to live with each other.

Governments have serious roles to protect the lives of citizens especially foreign citizens,” he added.

Osinbajo who was in Ghana to represent Buhari at the ECOWAS summit of the Authority of Heads of States and Governments, said ECOWAS insistence on the restoration of a civil rule in Mali, remained sacrosanct.

Osinbajo told journalists in Ghana shortly after the summit, that the over five-hour meeting was very fruitful, adding that ECOWAS would not accept an undemocratic rule in the country.

He said: “I think the position of the Authority of Heads of State, (the highest organ of ECOWAS) is very clear, mainly that ECOWAS will not accept a change of government by force and that this will be completely unacceptable.

“For the purpose of what has happened in Mali, the transitional government must be headed by a civilian, and also the general principle that marks a transition period should be within a maximum of about 18 months.”