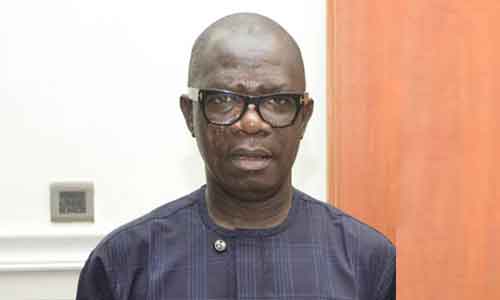 The brickbats over the propriety or otherwise of Governor Rotimi Akeredolu handing over to his estranged deputy, Agboola Ajayi, continued on Saturday as the latter insisted on taking over the reins of government as acting governor.

Governor Akeredolu had on Tuesday, personally disclosed that he had tested positive for COVID-19 but allayed the fears of the people of the state, especially his supporters that he was fit to work from self isolation.

Following this development, some supporters of the deputy governor commenced a social media pressure on Governor Akeredolu to hand over to Ajayi.

Ajayi had penultimate week defected to the opposition Peoples Democratic Party(PDP) to run for the governorship ticket of the party even as he insisted he will not resign his position as deputy governor.

But the state government over the weekend made a formal declaration foreclosing the consideration of handing over governance to Ajayi.

The Commissioner for Information and Orientation , Donald Ojogo said aside the loss of trust and alleged treachery on the part of the Deputy Governor, governance was not grounded as Akeredolu remained active in the line of duty.

Ojogo’s position notwithstanding, the deputy Governor insists Governor Akeredolu remained partially incapacitated and had no choice than to hand over the reins of governance to him. Ajayi gave the Governor a 21 day ultimatum to effect the process.

In a statement issued and signed by his media Adviser, Allen Sowore, the deputy governor took a swipe at the governor for not living up to his exalted legal profession as a Senior Advocate of Nigeria.

Curiously, Sowore’s statement, in what looks like a u-turn, came less than 10 hours after Tope Okeowo, Ajayi’s press secretary issued one giving indications that he(Ajayi) was not prepared to step in for Governor Akeredolu since he was not incapacitated.

Sowore’s said in the statement:
“Ordinarily, one expects Mr Governor to bring to bear on governance his background as a lawyer and Senior Advocate of Nigeria, (SAN). But it is rather surprising and worrisome that the Governor has chosen the part of perversion of justice, by allowing his close aides to go astray in a matter of constitutionality.

“Section 190(2) of the 1999 Constitution of the Federal Republic of Nigeria (as amended) is apposite in the prevailing constitutional abberration in Ondo State. On our part, we will continue to pray fervently for Mr Governor’s quickest recovery.

“However, it should be noted, that Mr Governor is at liberty to handover or not within 21 days after which the constitution becomes operational. Ostensibly, the refusal and failure of Mr Governor to handover the running of government to his deputy while he is temporarily incapacitated in self- isolation underscore his absolute disregard for our nation’s supreme document, 1999 Constitution (as amended) as well as the tenets of rule of law.

“The Governor’s position is a spite on the Ondo State people and a direct assault on the provisions of the constitution which he swore to uphold.

“Governor Akeredolu’s deliberate mounting of obstacles to smooth running of government machinery while he’s in self isolation as a result of the fact that he has been tested positive for the COVID-19 privileges the hypocratical nature of Ondo State government’s war against the ravaging pandemic,” Sowore added.