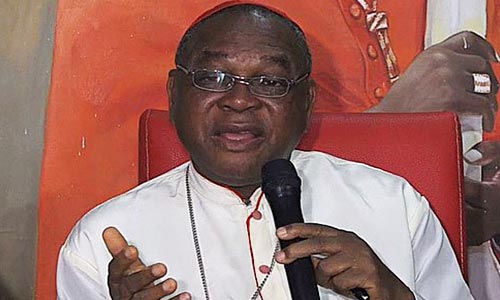 The immediate past Catholic Archbishop of Abuja, John Cardinal Onaiyekan has urged the Federal Government to urgently addressed the insecurity along Abuja-Kaduna road and other parts of the country, which has led to the kidnapping and killing of several Nigerians.

Onaiyekan made the call on Saturday in Abuja while briefing newsmen on the coming international conference on irregular migration scheduled to hold on Tuesday in Abuja, with theme “Action against Irregular Migration of Nigerians”.

He expressed sadness that Nigerians are at the mercy of kidnappers who now carry out their criminal activities and demand ransom without fear.

“if you have no idea of how to make Nigeria develop through education, security amongst others then, do not go into politics. Unfortunately I cannot say that they should not ask for my vote because they no longer asked for votes they take it by force. Politics is for people who will organize things for us in Nigeria.

“This sane kidnapping issue happened along Lokoja-Kabba road some years back. I could not travel then. I could not understand that 30 kilometers of road cannot be policed. And they are small boys. When government decided to do something then especially when many of the big men were kidnapped. They tackled the issue.

“On the Abuja-Kaduna road, the government and police have told us several times that they have put up high level security checks and that they have cleared the road and they boys have come up and said that they are still operating on the road. But why is that possible because there is something wrong with the security apparatus of this country. It should not happen that kidnapping has now become a regular business on our high ways. It doesn’t happen in any civilized country,” Onaiyekan said.

Speaking on the conference and the action against irregular migration, the Cardinal said that migration was a fundamental right of every human being but must be done in ways that would not violate the laws of any host nations.

According to him, it is a thing of concerned for any government to be worried about the youths of the nation engaging in irregular migration.

While appealing to the Federal Government to address the hardship presently ravaging the country, and which has largely contribute to the the illegal migration and human trafficking, Onaiyekan said that the poverty in the land makes Nigerians youths vulnerable in the hands of smugglers.

“No matter what you tell them about the suffering others have encountered outside the country they still believe it will be better than what they are presently facing in the nation,” he added.