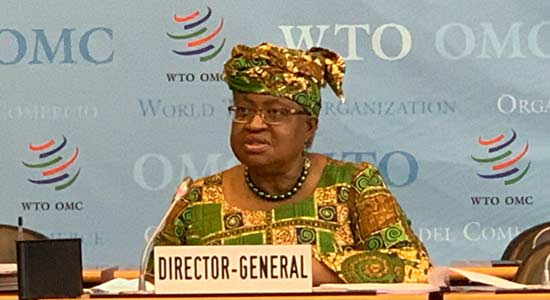 Director General of the World Trade Organisation (WTO), Dr. Ngozi Okonjo-Iweala, has lamented the low rate of COVID-19 vaccination in Nigeria and Africa, in general. Okonjo-Iweala said to fill the wide immunisation gap, WTO was ramping up vaccines’ production, with a target of 11 billion doses by the end of this year, way beyond the present output level of 3.8 billion.

Speaking at the National Diaspora Day 2021, organised by the Nigerians in Diaspora Commission (NIDCOM), with the theme, “Diaspora Integration for National Peace and Development,” Okonjo-Iweala said the vaccines production volume had been increasing, with the figure in June growing by 1.1 billion, representing a 45 per cent increase from May production.

However, the former Nigerian finance minister said, “The bad news is that most of those doses ended up in the developed countries and the vaccine inequity continues and that is why we are trying to work with them (vaccines producers) to change the story.”

She explained, “Right now, one of the things I am trying to do since we are in the pandemic and you know all the numbers we are struggling with, when you have so many people vaccinated in developed countries and only a small percentage in Africa or developing countries and the issue is how do we improve the vaccine productions so we can get more?

“How do we even shift the production to African countries? The WTO has the job of monitoring export restrictions and trade facilitation measures, and what I am trying to do is to leverage that, to actually work with companies; to persuade them that ‘if we work with you to monitor supply chains, remove export restrictions, will you invest in our country?’

“Just a few days ago, last Thursday, we had a conference with manufacturers of vaccines, all the CEOs of the major companies were there; from Moderna to Pfizer to AstraZeneca, J& J; the Chinese ones also. And the idea is supporting them to invest in Africa, including in Nigeria. I just want to say the president set up a taskforce headed by the Minister of Health to look at the issue of how we manufacture our own vaccines. All of us from the diaspora are there to see how we can help support the country to do better. From a personal point of view as well as WTO point of view, these are some of the things we are doing.”

The WTO director general also revealed that the organisation was working with the International Trade Centre to support women to upgrade the quality of their products so that they could enter the international market.

She said, “I met with a group of women from Oyo State who were making Shea butter and they could not export their products to US or Europe because it didn’t meet the standards. The WTO and the ITC worked with them to upgrade the quality; NAFDAC approved it and they have been able to export. This is another area we have been helping the small and medium scale business.”

Okonjo-Iweala commended Nigerians in the diaspora for contributing billions of dollars to the country’s economy, which had been helping in sustaining the economy. She said this had helped people in rural areas to send their children to school, take care of their health, and run businesses.

The former minister stated, “Wherever you are in the diaspora, there is nowhere like home. I think what you need to think about is, what can I do to make things better, wherever you are, either creating employment or business or civil society organisation, helping to support what the local government is trying to do.”
In her opening remarks, Chairman/Chief Executive Officer, NIDCOM, Hon. Abike Dabiri-Erewa, said necessary measures were being put in place to ensure that Nigerians in diaspora were allowed to vote in the on-going constitutional review.

Dabiri-Erewa said, “As part of the mandate of NIDCOM, the leadership and team of the Commission is putting its best at ensuing that the issue of diaspora voting tops the agenda of the current constitution review by the National Assembly. I assure you that both Committees on Diaspora and our Civil Society Organisations are strongly supporting diaspora voting to be actualised in Nigeria in the shortest time possible, especially with the contributions of the Nigerians in diaspora to national development.”

In his keynote address, Minister of State for Foreign Affairs, Ambassador Zubairu Dada, assured that the federal government would constantly strive to create an enabling environment for the diaspora population through policies meant to guarantee their safety and wellbeing. Dada said government had adopted the National Diaspora Policy 2021 (NDP) and its Action Plans.

According to him, the National Diaspora Policy 2021 aims to provide a comprehensive and supporting framework for facilitating diaspora engagement in national development, empowering the diaspora to contribute effectively, and maximising the value of diaspora contributions to Nigeria’s development.

Meanwhile, WTO has expressed optimism that the production of COVID-19 vaccines could rise from the current output level of 3.8 billion to 11 billion by the end of this year. This was disclosed by the spokesperson of the global trade body, Mr. Keith Rockwell, during a virtual press conference he hosted from Geneva, Switzerland, at the weekend.

Rockwell also revealed that Director General of the WTO, Dr. Ngozi Okonjo-Iweala, had proposed a fund that would provide technical assistance to developing countries for the implementation of an anticipated agreement on the removal of fisheries subsidy.

Rockwell said, “There was an important discussion on Wednesday on the importance of ramping up production of vaccines. But what the producers said is that for them, the biggest problem is getting access to raw materials. This is the thing that has been hindering them from ramping up production.

“But there is a positive feeling, which we have to wait and see materialise, that production of dosage for the vaccines, which is currently at 3.8 billion, could ramp up to 11 billion by the end of the year.
“its materialisation will be good news. There was a big jump in June and it seems production is going up in July.”

He also disclosed that fundamental disagreement still persisted over the waiver of trade agreement for diagnostics required for the manufacture of COVID-19 vaccines.
Rockwell said, “It is almost an ideological difference, which is a source of frustration to the proponents of waivers that expected text based negotiation and an agreement on the issue by the end of this month.

“Now the commitment is to try and resolve this along with other areas that have not been attended to because of the focus on trade waiver. These areas are export restrictions, trade facilitation measures and how to make compulsory licensing easier to do. All these things are important issues.”

Rockwell disclosed that the director general also spoke on the need to identify bottlenecks in the supply chain and how to overcome them.

According to him, “Everyone has said that the transfer of technology is critically important. One of the things that the producers, especially those in developing countries, have to say on Wednesday is that for them the most important issue is the transfer of technology and know-how that will equip them with the right training to produce these complex vaccines in a way that is safe and could generate economies of scale.”

He stated that the fund being proposed by the WTO director general would be jointly established by the body, the World Bank, the International Foodservice Distributors Organisation (IFAD), and the Food and Agriculture Organisation.

He said, “The director general has put forward to the membership a fund for technical assistance for those developing and least developed countries that might have difficulties in implementing the terms of the agreement because many members and ministers kept saying that they do not have the resources to be able to put forward adequate notification, or be able to get a grip on the circumstances of their domestic waters, because this can be resource intensive.

“This fund is about $20 million trade facilitation fund from WTO and involves working with other organisations like IFAD, FAO and the World Bank. The idea is to make sure that there is no overlapping in terms of what is done. Any fund that comes from the WTO must be used for specific WTO’s mandate while other issues can be dealt with by other organisations that may have more money than we do.”