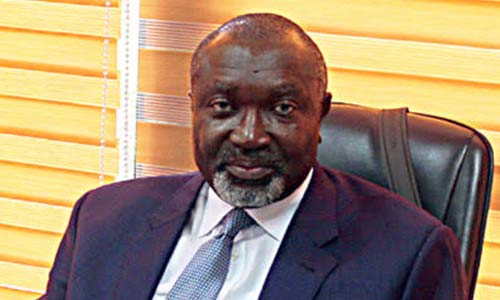 A Senior Advocate of Nigeria and former prosecutor with the Economic and Financial Crimes Commission (EFCC), Chief Godwin Obla, has accused the suspended Acting Chairman of the Commission, Ibrahim Magu, of engaging in an abuse of power in an orchestrated attempt to tarnish his reputation.

Obla had been charged before the Lagos division of the Federal High Court along with Justice Rita Ajumuogobia on allegations of offering the judge a bribe for judicial favours.

The charge specifically alleged that Obla paid a bribe of five million naira to the judge to obtain a favourable judgment in the case of FRN V. Raymond Temisan Omatseye; Charge No: FHC/L/C/482C/10.

Obla was, however, discharged and acquitted by the court after his name was removed from the amended charge sheet.

He said that his prosecution was an act of malicious and brutish use of power by Magu.

‘Obviously, the charge ought not to have been filed in the first instance as the charge sheet and the proof of evidence does not bear out any allegation of possible bribery payments to Hon Justice Ajumogobia ostensibly in return for judicial favours inuring in favor of EFCC.

‘There is/was no foundation or basis whatsoever for making any such bribe payments to a judge on behalf of EFCC.

‘Today marks the end of a long tortuous and arduous journey for Chief Godwin Obla, SAN, formerly foremost EFCC special prosecutor and affirms the particularly malicious and brutish obsessions of Suspended/Former Acting Chairman of EFCC, Ibrahim Magu with the naked and reckless abuse of state power for private ends.

‘The events of today is of eminent importance as it confirms that Ibrahim Magu completely derailed from the ethos of the EFCC and instead resorted to the unmitigated abuse of power as “Acting Chairman of the EFCC” manifested in the wrongful arrest, detention and prosecution of several persons for unsubstantiated offences, purely out of malevolence.

‘Prior to Ibrahim Magu’s advent as Acting Chairman of the EFCC, Chief Godwin Obla SAN was one of the frontline Prosecutors for the Commission and he performed the EFCC’s instruction so creditably that in 2010, the Acting President, Goodluck Jonathan, constituted a legal team led by the erstwhile President of the Nigerian Bar Association, J.B. Daudu SAN and comprising of other eminent lawyers to investigate and prosecute various entities known as the “Halliburton Parties”.

‘The legal team in the Halliburton prosecution successfully extracted fines in excess of $200 million in favour of the Federal Government of Nigeria, even though the legal architecture was not designed to extract that much.

‘In spite of the foregoing, the Suspended/Former Acting Chairman of EFCC, Ibrahim Magu out of pure malevolence went to great lengths to tarnish the image of its former frontline prosecutor by directing that he be tried before the High Court of Lagos State, alongside Hon. Justice Rita Ofili Ajumogobia on the spurious, unfounded and, frankly ridiculous allegation that he paid a bribe of N5,000,000.00 (Five Million Naira) to the Judge to obtain a favourable judgment in the case of FRN V. Raymond Temisan Omatseye; Charge No: FHC/L/C/482C/10. A cursory reading of the 4 Counts Charge filed at the direction of Suspended/Former Acting Chairman of EFCC, Ibrahim Magu against Chief Godwin Obla SAN accusing him of the offences of perversion of the course of justice and gratification of a judicial officer to obtain a conviction in Charge No: FHC/L/C/482C/10 between FRN V. Raymond Temisan Omatseye will show that same is clearly a travesty of justice as it reveals a personal conspiratorial girth orchestrated against him by Suspended/Former Acting Chairman of EFCC, Ibrahim Magu, aimed at tarnishing his hard-earned reputation, accomplishments and years of hard work as an anti-graft prosecutor and legal practitioner.

‘My history of service to the country in this regard is public knowledge and no temporary setback or personal misunderstanding is enough to obviate it. My time and resources will always be available to the Nigerian state within the strict parameters of the Rule of Law.

‘Finally, for many years and before the advent of the present administration, I have carried the mantra of anti-corruption practitioner and prosecutor for EFCC. I have carried out my vocation with every sense of decency and responsibility, only employing the highest standard of professionalism required of me in the anti-corruption fight. I continue to remain steadfast to the nobility of my profession as a lawyer and Senior Advocate of Nigeria, and will always refrain from any act, which is capable of bringing the legal profession into disrepute.’