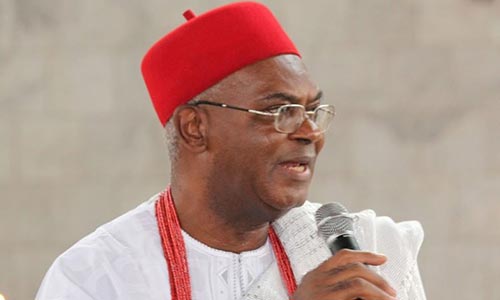 The Obi of Onitsha and Chairman, southeast Traditional Rulers Council, Igwe Alfred Achebe has canvassed for stiffer measures for defaulters of environmental laws in Anambra state.

Achebe made the call on Saturday during an inspection visit to the erosion site in Obeleagu and Nkisi Aroli streets in Onitsha, which reportedly submerged scores of building and displaced families.

He regretted the devastating effect of the erosion in the area, blaming it on activities of excavators and those who build and dump refuse along water ways.

He stressed the need for those responsible for enforcing the laws to rise to the occasion as a way to addressing the menace.

He said, “Virtually every erosion situation in Anambra state is man-made. We are the ones creating the erosion. We excavate soil in the wrong place, build houses in the wrong place. God has created nature for us and places covered.

“Moving along the highways, you see people excavating the soil without any consideration because they want to make money.

“Environmental department must be strict on the rules on soil excavation. We have to keep the building plans, water channels must be kept from being blocked.

“The laws are there, it is enforcement that is our problem. The enforcement agencies must ensure they enforce the law. Once one person is charged, others will learn.”

Appreciating the state government for its quick intervention, the Monarch however
appealed for more intervention from federal government so the scourge could be tackled once and for all.

He further disclosed that the victims of the incident were earlier in the day provided with palliatives at his palace.

“Today at Imeobi, the community gave palliatives to the victims. That’s much we can do for now. We can’t build houses for them.

“We plead with the residents to keep to the environment plans. Don’t block the drainage,” he added.

The Project Manager of the contracting firm, Freddy De Kleyn assured that the work would be delivered acccording to specifications, hoping that rain would not stall the pace of work.