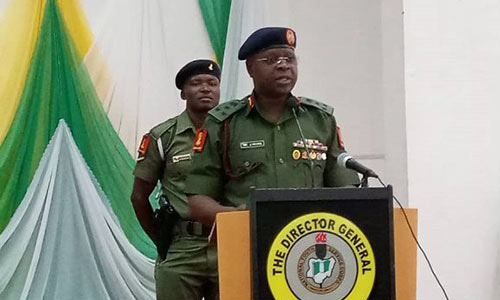 In what appears to be a tardy disposition to the review of official documents, the management of the National Youth Service Corps has denied an express advice in the handbook issued to youth corps members.

The handbook is titled, Security Awareness and Education Handbook For Corps Members and Staff.

The handbook, on page 56, had advised corps members travelling on “high-risk” roads to alert their “family members, friends and colleagues to have someone on hand to pay off the ransom that could be demanded” in case they are kidnapped.

The Scheme listed such roads as “Abuja-Kaduna, Abuja-Lokoja-Okene, or Aba-Port Harcourt” roads. 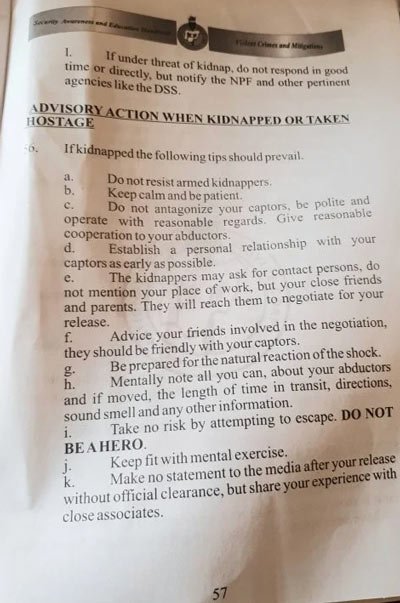 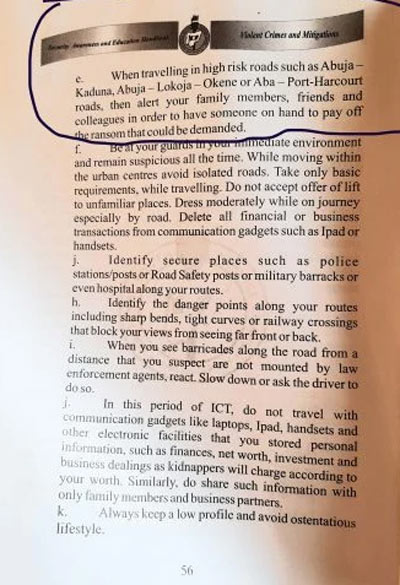 The NYSC denies giving the advice, even when each corps member has the handbook, which has also been obtained by from a youth corps member currently undergoing the mandatory one-year national youth service in the Batch B Stream 1 cohort.

The NYSC emphatically states that the clause quoted is not embedded in NYSC Security Tips pamphlet, which was allegedly put together by “a highly respected retired security expert.”

Also, page 57 of the handbook tutored corps members on how to conduct themselves when kidnapped.

The section titled, ‘Advisory Action When Kidnapped Or Taken Hostage’ partly reads, “Do not antagonise your captors, be polite and operate with reasonable regards. Give reasonable cooperation to your abductors.

“Establish personal relationship with your abductors as soon as possible.

“The kidnappers may ask for contact persons, do not mention your place of work, but your close friends and parents. They will reach them to negotiate for your release.

“Advise your friends involved in the negotiations, they should be friendly with the captors.

“Take no risk by attempting to escape. DO NOT BE A HERO.

“Make no statement to the media after your release without official clearance but share your experience with close associates.”

However, in a statement, the NYSC management refuted the content of the handbook despite the fact that the authorities issued the handbook to every corps member during their orientation exercise across the country.

The attention of Management of the National Youth Sevice Corps has been drawn to a fake release making the rounds on the social media to the effect that Corps Members travelling on “high risk roads” should alert their families, friends and colleagues in order to have somebody to pay off the ransom that could be demanded in the event of being kidnapped.

Management wishes to emphatically state that the clause quoted is not embedded in NYSC Security Tips pamphlet which was put together by a highly respected retired security expert.

Management wishes to appeal to the general public to always clarify issues with the Scheme.
Please, be wary of falling prey to the antics of mischief makers out to ridicule the Scheme.

Management shall continue to prioritise the security and welfare of Corps Members and staff at all times.

In recent months, the Abuja-Kaduna, Abuja-Lokoja-Okene and Aba-Port-Harcourt roads have witnessed an unprecedented spate of kidnapping as rampaging bandits waylay travellers, take them hostage until their families and associates pay huge amount of money before releasing them.

Students have been the most affected by the menacing activities of the unscrupulous elements; and parents of prospective corps members kicking against the posting of their wards to bandits-ravaged states. But despite their objection, thousands of fresh graduates are still being posted to high-risk zones.

A number of corpers have been kidnapped in recent months. The rate of kidnapping on major roads have forced many corps members to abandon road transportation and opt for air transportation to connect their base to their states of posting which is usually outside their geopolitical zone.

Kidnapping has become a sordid menace and a lucrative ‘enterprise’ in Nigeria as the West African nation’s security situation worsens.

Many Nigerians are disappointed in the regime of the President, Major General Muhammadu Buhari (retd.), who rode to power on the heels of combating the security challenges plaguing the country in 2015 but the situation seems to have been aggravated in the last six years.

Aside from the kidnapping of students and corpers, hundreds of Nigerians have also fallen victims to kidnappers in recent times. Their families have had to part with millions of naira to secure their release after days or even weeks of excruciating pains and agony. However, some families have not been so lucky as the daredevil kidnappers rape and kill their victims even after receiving millions of naira as ransom.

The Senate had proposed a bill seeking to prohibit the payment and receipt of ransom for the release of any person kidnapped, imprisoned or wrongfully confined.
According to the bill, Nigerians who pay ransom to kidnappers and kidnappers who receive ransom risk 15 years imprisonment.

But many Nigerians had flayed the upper chamber and described the bill as stupid. They noted that the National Assembly should instead focus on ensuring they make laws that guarantee adequate security for every Nigerian.