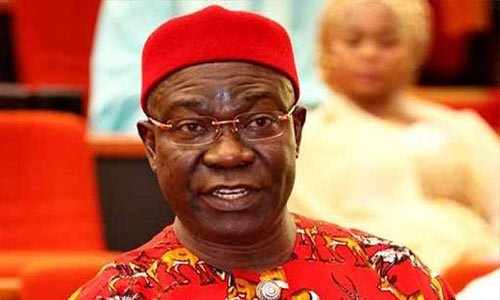 Former Deputy President of Senate, Ike Ekweremadu yesterday restated his faith that electronic transmission of results would still be part of the 2023 general election.

Ekweremadu who represents Enugu West Senatorial District said transmitting results of the 2023 elections electronically was the best way to go and appealed that the issue should not be reduced to party or sectional dichotomies.

The lawmaker who was not at the Senate plenary of Thursday, July 15 when the upper chamber voted on the Electoral Act Repeal and Re-enactment Bill as he was on official assignment in far away Montenegro where he attended a prescheduled regular session of the International Parliament for Tolerance and Peace (IPTP) as Nigeria’s representative and presented the Memorandum of Understanding (MoU) between the National Assembly of Nigeria and the IPTP, said there was still the possibility that bill on electronic transmission of results would make the constitution amendment.

He assured of his resolve to work with other patriotic and progressive lawmakers to resurrect electronic transmission of results upon the resumption of the National Assembly, starting from the point of harmonisation of the clauses passed by the Senate and the House of Representatives.

In a statement by his Media Adviser, Uche Anichukwu, in which he explained the absence of the former Deputy President of Senate last Thursday plenary, Ekweremadu stated that every lawmaker was expected to vote in support of what is best for the country, irrespective of political affiliation.

On the rejection of electronic transmission of election results by the Senate, the statement said, “It is unfortunate that just as was the case in the last National Assembly when efforts to better the quality of our elections were serially frustrated and it was eventually not signed into law by Mr. President, non-progressives are equally frustrating the current exertions. But that is not enough to assume that everybody, who was not present at the July 15 plenary, simply chickened out. Why would Ekweremadu chicken out?

“Ekweremadu acknowledges that vested political interests obviously never wanted electronic transmission of results to come to fruition. They used their number to block it. However, it is also a fact that the vehemence of those minded against such reform is not new. The Senator nearly lost his life in this cause as armed criminals stormed the Senate on April 18, 2018 to cart away the mace and truncate the discussion of the Electoral Act Amendment Bill, which included electronic conduct of elections. Ekweremadu presided on that fateful day. It is on record that the lawmaker stood his ground.

“Despite all the odds that have been stacked against him, Ekweremadu has remained consistent and true to his political beliefs and conscience, refusing to legislate out of fear or to fear to legislate.

“It is very unfortunate that those who rode to power on the back of the electoral reforms and conducive democratic environment engendered by PDP administrations have continued to take various caustic measures to frustrate further electoral reforms.”

Furthermore, the statement reads, “Ekweremadu is not deterred by attacks on his person by the uninformed over the outcome of the voting on the electronic transmission of results.

“Therefore, as was the case with electronic voting, Ekweremadu is resolved to work with other patriotic and progressive lawmakers to resurrect electronic transmission of results upon the resumption of the National Assembly, starting from the point of harmonisation of the clauses passed by the Senate and the House of Representatives.