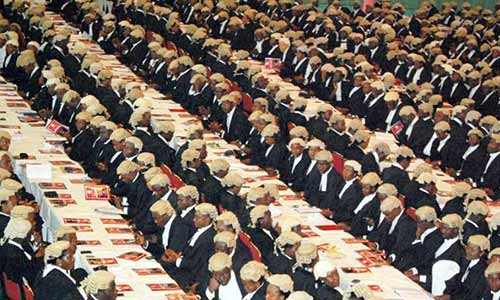 Some law school students of Oyo State origin have distanced themselves rebutted the statement of Mr Olaniyi Adisa Ogunlade published on news on the 23rd of September 2019 that ” not all backlog students benefited from the bursary, a fall out of their failure to send their details as at the time of collating the lists.” they said the statement is untrue.

A student who pleaded anonymity said majority of students resumed school late and all attempts to get their names included proved abortive. Below was what the student says:

I humbly wish to rebut the statement of Mr Olaniyi Adisa Ogunlade published on your news platform on the 23rd of September 2019 that ” not all backlog students benefited from the bursary, a fall out of their failure to send their details as at the time of collating the lists.”

This statatement is entirely false. The non-inclusion of our details was due to his administrative deficit and highhandedness. Majority of us resumed late at the Nigerian Law School due to some financial constraints and all efforts to make him and the other exexecutives include our details before they sought the approval of the Governor and thereafter were stonewalled by him. In fact , he insisted that he wouldn’t add our names to the list even before and after they sought the Governor’s approval because it would “delay the bursary ”

A list of all Oyo State indigenes of the 2019/2020 Backlog Set at the Nigerian Law School was sent to the State Ministry of Education but this list was swept under the carpet because he pushed his weight and influence around to make sure that the list he compiled was the one executed.

When questions were asked in respect of this, he changed the group settings so that people won’t be able to write on the group and thereafter removed them. As a matter of fact, he dubiously added some names to the list and that is why he made sure the Nigerian Law School approved list was swept under the carpet and of course , with the help of some individuals at the Ministry of Education; although we are still investigating that and once we have a concrete evidence to corroborate the evidence we already have, we would go down the route of making an official report about his gross misconduct to the Nigerian Law School and the Council of Legal Education.

Thank you for your time.