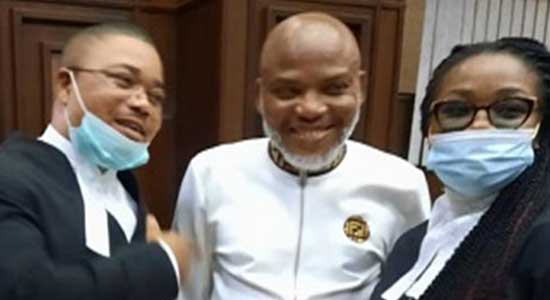 The self-acclaimed leader of the Indigenous People of Biafra (IPOB), Nnamdi Kanu, on Thursday, pleaded not guilty to the seven-count criminal charge preferred against him by the federal government.

Kanu is also challenging the court’s jurisdiction to hear the matter on the grounds that the alleged offences were committed in the United Kingdom and not in Nigeria.

His lawyer, Mr Ifeanyi Ejiofor, made the disclosure shortly after his re-arraignment before Justice Binta Nyako of the Federal High Court, Abuja.

Kanu was in June re-arrested in Kenya and extradited to the country to face his trial.

He was first arrested in a Lagos Hotel in 2015 by operatives of the Department of State Services (DSS) and was arraigned alongside four others in 2016.

At Thursday’s re-arraignment, Kanu was sported wearing a white Fendi designer’s cloth and was ushered into the courtroom at exactly 10am by security operatives and took his fresh plea to the amended charge at about 10:45am.

Just like the earlier charge, Kanu also pleaded not guilty to the fresh charge, although his lawyer had requested that he be transferred to the custody of the Correctional Service Centre, but the judge declined to grant the request on the grounds that it would be in the interest of Kanu to remain with the DSS.

The court had ordered that the IPOB leader be kept in custody of the DSS pending his arraignment and commencement of trial.

Meanwhile, Justice Nyako had adjourned to November 10 for hearing of Kanu’s application challenging the court’s jurisdiction to try him as well as the competence of the charge.

Among the issues raised in the Notice of Preliminary Objection are that the said charge has not in anyway link the defendant to the charge; the alleged offences were also said to be committed in the United Kingdom, amongst others.

In a related development, the Ohaneze Indigbo has accused the federal government of conducting a secret trial on the issue of Kanu.

Chief Ralph Uwazurike, who spoke alongside former Anambra Governor, Chief Chukwuemeka Ezeife, said that the socio-cultural group condemns the trial in its entirety because they were barred from covering the proceedings.

Similarly, the senator representing Anambra South Senatorial District, Senator Ifeanyi Uba, also condemned the action of the federal government, claiming that as a senator of the Federal Republic he ought not to be barred from witnessing the proceedings.

He lamented that even after filing a case in the matter, he was still denied access.

Meanwhile, as the trial gets underway, journalists covering the court, although allowed entry into the court premises, were however prevented from entering the court room.

The judiciary correspondents, in a bid to give a detailed coverage of the proceedings, had got to the court as early as 6am to ensure easy access but their efforts turned out to be unrewarding.

This was despite the fact that the journalists had forwarded their names to the court and DSS for coverage of the proceedings.

At the last adjournment on July 27, there was altercation between the operatives of the DSS and journalists, following their refusal to allow journalists access to cover the proceedings.

One of the DSS operatives, whose identity could not be ascertained, had claimed that they are awaiting directives from the trial judge, Justice Binta Murtala-Nyako, on how many journalists should be allowed into the court and cover the proceedings.

“The instruction we have is that journalists should stay in their press centre from where they would be screened to go in to cover the proceedings after getting clearance from Justice Nyako, the trial judge,” he had said.

While the trial was going on in the fifth floor, journalists were not allowed to move out of their press centre.