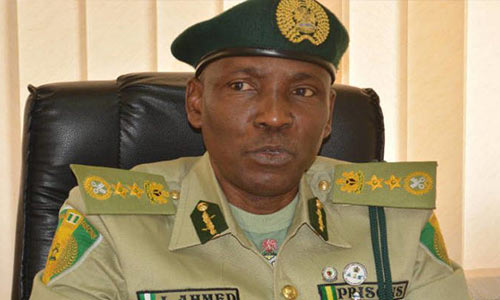 *Pulling Out Parade To Hold Thursday

Ja’afaru Ahmed, the Comptroller-General of the Nigerian Correctional Service is set to bow out after two tenure extensions.

President Muhammadu Buhari had earlier extended his tenure, who was initially billed to retire in July, 2019.

Rauf Aregbesola, the Interior Minister had stated that the decision to recommend the tenure extension of Mr. Ja’afaru was because of his “track record of innovative reforms in the Prisons Service and the need to consolidate and complete some of the on-going programmes, especially on human rights compliance, reformation and health care, agricultural and education programmes for the inmates”, consequently his tenure was extended, initially billed to lapse in July, 2020.

TheNigerialawyer, had earlier reported that the interior minister was planning to recommend a third tenure extension for the officers, which was however greeted with concerns expressed from several quarters, both from the retired and serving officers.

However, in an internal memo signed by the Deputy Comptroller-General of the service, John Mrabure, which was sighted by TheNigeriaLawyer, it was stated that a pulling out parade is expected to be conducted for Mr. Ja’afaru, who is required to hand over before the ceremony.

Besides, there has been speculations from several quarters over who is going to replace him, but however, if no one is announced, Deputy Comptroller-General of the service, John Mrabure, being the most senior officer is to take over in the interim.

Meanwhile, it was added that the parade is to hold on Thursday, 21st January, 2021 at the headquarters in FCT, Abuja.