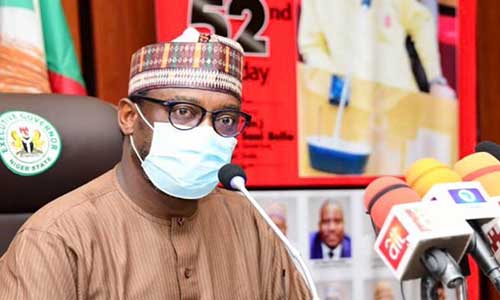 Niger State government has cried out over the presence of members of the Islamic State of West Africa (ISWAP) and Boko Haram terrorists in Borgu and Shiroro Local Government Areas of the state.

The secretary to the Niger State Government (SSG) Alhaji Ahmed Ibrahim Matane stated this on Tuesday in a press briefing with the newsmen in his office at the Government House Minna.

He added that the ISWAP members have already established their presence in Babana, a border town between Nigeria and the Republic of Benin in Borgu Local Government Area of the state.

He stated that the Boko Haram terrorists were also operating in some communities in Shiroro Local Government Area of the state.

The SSG reaffirmed a statement credited to Governor Alhaji Abubakar Sani Bello earlier this year at a public gathering in the state about the presence of some Boko Haram elements in the Shiroro Local Government Area of the state.

Speaking further about the precarious security situation in the state at the moment, he said that the “ISWAP elements are operating in the periphery of Nigeria and Benin Republic, specifically in the areas of the Kainji National Park and around the vast areas of the park up till Banana, a border town between Nigeria and the Republic of Benin in Borgu Local Government Area of Niger State.”

Matane stated further that “now, they have made some audio recordings stating that they were there, that they were not kidnappers, that they were a religious organisation that was poised at establishing a caliphate in the area that will deal with issues of criminality and other related matters.”

He noted that ISWAP elements were the same people that kidnapped a traditional ruler in the Borgu Kingdom recently “the Dodo of Wawa”, adding they assured the state government that they were not armed bandits, that they were there because they were “God sent.” He added that “We’re not negotiating with the group.”

Ibrahim Matane said that the “ISWAP members cannot enter into Benin Republic because the Benin Republic authorities have put a barrier on their border. So they are only operating along the periphery of Nigeria and the Republic of Benin.”

Speaking further during the questions and answers session, he explained that the presence of the Boko Haram terrorist group was also in Shiroro Local Government Area of the state. He added that they (Boko Haram) were trying to convince the people in the rural communities to join their group, highlighting that they were instigating the villagers against the government by indoctrinating the people.

He, however, did not mention the steps being taken by the state government to eliminate ISWAP and Boko Haram terrorist groups from their enclaves but said the “government was looking into the issues.”