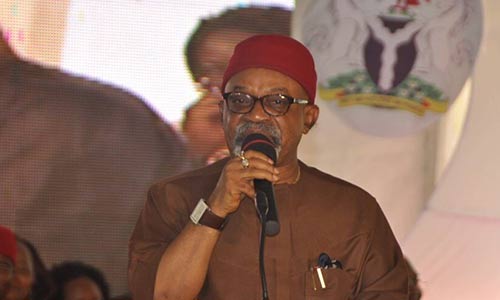 The Minister of Labour and Productivity, Dr Chris Ngige’s quoted claims that the federal government has completed work on Oba-Nnewi-Amichi-Okigwe road which has largely been abandoned for many years has attracted criticisms from the Igbo.

Some visibly angry Ndigbo who spoke over the Minister’s statement on Channels Television described the claim as very unfortunate.

They said that no work whatsoever had been done on the Oba-Nnewi-Amichi-Okigwe road which connected Anambra, Imo, Abia and South-South States, as the Hon Minister claimed, since the government of President Muhamadu Buhari came on board.

“Ngige’s claim is part of the problems of Ndigbo and it is embarrassing to say the least, that Dr Chris Ngige will be lying against his own people just to satisfy his paymasters. The statement as far as I am concerned is a practical demonstration of the fact that the Minister of Labour and Productivity has lost touch with reality in Igboland, ” an Onitsha-based businessman submitted.

The former Chairman of Police Service Commission (PSC), Chief Simon Okeke who told journalists with evidence how he actually single-handedly ensured that the road in question was upgraded from a local to federal road in 1975 said that the road had been largely abandoned for decades.

“In 1975, the administrator of East Central State, Dr Ukpabi Asika gave me a work to do and after I successfully completed the work, the administrator was very pleased and he requested to know what I would like him to do for me. I went back to him the following day to ask him for the construction of a good road to open up my community.

“Specifically, I mentioned the Oba-Nnewi-Amichi-Okigwe road. He said that the issue of road construction was late because the federal government had already ratified the local roads to be taken over for construction but I insisted. That was how it was approved. It was under the administration of Alhaji Sheu Shagari and Dr Alex Ekwueme that the road was listed for construction as a federal road with file number F112, ” Chief Okeke said.
He noted that he has been engaging some representatives in the National Assembly and others in government to get money voted for reconstruction of the road and that only few of the people contacted actually responded positively.

Chief Okeke who said emphatically that he was not putting Dr Chris Ngige on a judgement seat declared that the Minister’s claim about the abandoned road was unfortunate.

He, however, appealed to the federal government to come to the rescue of the people of the area by working on the “all important road” that connected many States in the country.

Chief Okeke who was so passionate and emotional about the road urged the federal government to conduct an investigation “as the claim of a serving Minister that an abandoned road is completed is worrisome.”

Every attempt to get the Hon Minister’s furthr comments on the issue proved abortive.