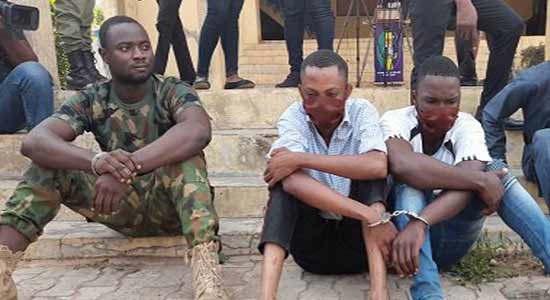 “He was being tried for that motorcycle theft when he was caught conspiring with a soldier to rob some people with a dagger. We paraded them and the victims identified them. Other victims came and identified them. When we are done with our investigation, we will charge them to court.”

The soldier denied involvement in the allegation saying he stepped back at the scene of the incident.

He said he was held for being on illegal duty.

Other suspects paraded were one Wasiu Lateef who was alleged to defile a teenager at an uncompleted building in Lapanu village and a suspected teenage kidnapper, Bello Ali, who could not explain what he was doing in a forest between USO and Ogbese.

A fake soldier, Desmond Ikechukwu, who impersonates the Army to intimidate members of the public, was also paraded.

Desmond who confessed that he was not a soldier said he wore the uniform to a bar when he was arrested.

Salami however said one of the kidnap victims identified Bello as one of his abductors.