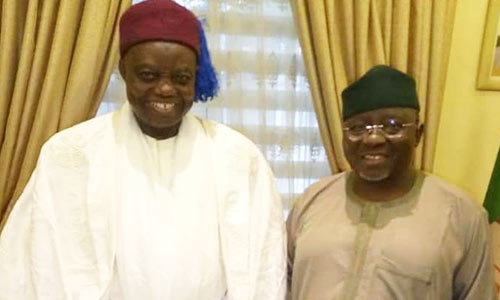 The new Emir of Lafia Emirate, Sidi Bage Muhammad I, was on Friday, presented with staff of office by Governor Umaru Al-Makura of Nasarawa State.

Mr Muhammad I was selected by kingmakers of the Lafia Emirate on March 26, following the demise of the 16th Emir, Isa Mustapha Agwai on January 10.

He was until his selection as the 17th Emir of Lafia, a justice of the Supreme Court.

While presenting the staff of office, Mr Al-Makura said emergence of the new emir was a welcome development to the people of the emirate given his track record in the temple of justice.

He expressed confidence in the ability of the Emir to engender peace, justice and equity in his domain.

Mr Al-Makura noted that his administration had incorporated the traditional rulers into the governance of the state, especially in peace building, saying their incorporation had yielded tremendous results.

‘‘The vast background, training, experience and exposure of our traditional rulers have contributed immensely to the maintenance of peace and harmonious co-existence amongst the people,’’ he said.

He attributed the relative peace in the state within the last few years to the support of the traditional institutions.

Mr Al-Makura also extolled the virtues of the late emir, Isa Mustapha Agwai, saying that the emirate enjoyed peace and witnessed unprecedented development during his reign.

He prayed God to grant the new emir sound health, wisdom and foresight in the task of superintending over the affairs of the emirate.

In his vote of thanks, the new emir, said the presentation of the staff of office was an honour done to the people of the emirate.

He urged the people of the emirate to sustain the peace and harmonious co-existence that the late emir, Agwai I, exemplified.

He noted that the Lafia emirate was unique as all the tribes were inter-related by blood and ancestry.

He, thereafter, promised to consolidate on the peace building efforts of the late emir to engender rapid socio-economic development of the emirate.

The News Agency of Nigeria reports that the ceremony had in attendance notable traditional rulers across the country led by Sultan of Sokoto, Sa’ad Abubakar III.

Others are the Shehu of Borno, Kyari El-Kanemi; Tor Tiv, James Ayatse; Gbom gwom Jos, Buba Jacob Gyang, among others.

Also present are the acting Chief Justice of Nigeria (CJN), Tanko Mohammed; former CJN, Alfa Belgore; and the President of the Court of Appeal, Zainab Bulkachuwa.