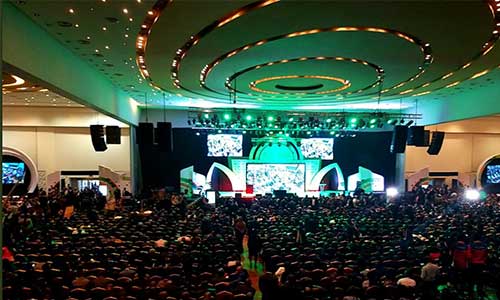 * Says Digital Photo Does Not Need To Be Accompanied With Memory Card To Be Admissible
*There Are Inadequacies In Section 84 Of The Evidence Act — Hon. Justice Alaba Omolaye-Ajileye

Honourable Justice Nelson Ogbuanya of the National Industrial Court has decried the slow rate at which we adopt technology here in Nigeria.

He made this observation whilst speaking on a panel discussion topic: ” LEVERAGING TECHNOLOGY IN JUSTICE ADMINISTRATION, ISSUES & CHALLENGES,” at the ongoing Nigerian Bar Association Annual General Conference.

According to Justice Ogbuanya, we received technology late when others have left what we are introducing for something more advanced.

Speaking on why ICT should be adopted adequately, he recommended that Judges should update their ICT skills and knowledge and take charge of their ICT process.

Another panelist, Hon. Justice Alaba Omolaye-Ajileye, gave his view on legislative framework for admissibility of electronic evidence in Nigeria.

He stressed that we cannot escape from the reality of the digital age as cases coming into the courts now take new forms and actions. He gave examples of computer forgery, identify theft, cybercrime, etc.

”As lawyers, we must understand these realities and know how to apply them in our practice.

”The judiciary initially resisted technology, as they harbored the most technophobic people as judges were trained to be conservatives, but the narrative is changing mainly because there was a legislative intervention through enactment of Section 84 of Evidence Act 2011.

”Whether or not evidence generated from electronic devices was admissible within the framework of the old Evidence Act was highly contentious as there were many cases in the past where electronic evidence was rejected,” he said.

Speaking further, he said that there was also a restrictive definition of document before, but today it is now used broadly. He added that there are inadequacies in Section 84 of the Evidence Act.

”Our legislatures need to be proactive in enacting legislations and be alive to its responsibilities of enacting laws that reflect and match advancement in technology”.

Dr. Akpabio, on the other hand said that everyone is a stakeholder in the administration of justice. He cited the amendment made by the American Bar Association in 2012 to their rules, that a lawyer must be competent in delivering their service which include ICT competency. He urged the Nigerian Legal System to adopt same.

He therefore recommended the acquisition of tech skills by judges, policemen, prison officials, and those primarily involve in the administration of justice, adding that it must be compulsory for them. He also suggested special training and continuous education to be organized; that NBA should bring out rules for formation and accreditation for law firms to operate, including Tech compliance; that we need to amend some of our rules to make sure they are tech complaint; that there should be new rules for taking statement by police officers — there should be a video evidence also in taking statements; and that aresponsible regime that create healthy rules for marketing legal services should be introduced.

A Senior Engineer at Conoil, Mr. Mike Mbon, spoke briefly on the advantages of using Technology in Justice Administration.

He stated in his short note that as technology is growing, so crime is also growing. He said that we need tech to apprehend these criminals and for justice administration.

He also said that technology will make lawyers smart. He also stressed that with it, one will be able to manage and save documents very well; that it makes justice administration very easy by making it as a mobile office and that efficiency will be improved with technology.

During the question and answer session, a question was asked as to why some judges reject digital photo as an evidence because it is not accompanied by a memory card.

Responding, Hon. Justice Alaba Omolaye-Ajileye, said that it is not required that a digital photo be rejected by a judge because there is no memory card accompanying it.

He added that it was the old knowledge the judges are using, as in the case of coming with a photo accompanied by its negative, but this has changed and so the lawyer needs to put up a strong defense in this regard.