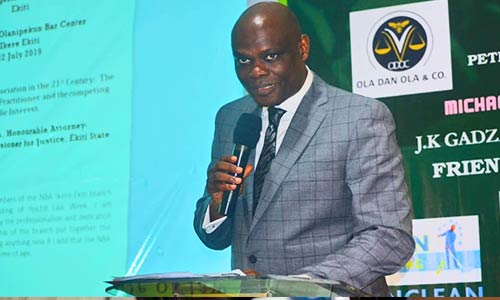 The Attorney-General of Ekiti State Olawale Fapohunda has called for a generational change in the leadership of the Nigerian Bar Association.

Fapohunda who was the guest lecturer at the 1st Chief Wole Olanipekun SAN Public Lecture, held in Ikere Ekiti yesterday said that NBA needs a leader from the digital age, with the knowledge, energy, and zeal to reform the Legal Profession and challenge the frail legal system.

The Attorney-General whose lecture was titled ” The Nigerian Bar Association in the 21st Century: The Interest of the Legal Practitioner and the Competing Duty to Act in the Public Interest” said that the frenzy over who leads the NBA and the bitterness that often accompanies bar elections has led to the weakening of the role of lawyers in facilitating and providing Leadership to critical reforms for the transformation of our justice system.

According to Fapohunda “the ideal that Lawyers work to ensure that all can enjoy the benefit of the protection of the law, including those who are vulnerable by reason of limited means; limited education; their minority status or their gender has long been a talking point within the Legal Profession. Regrettably, we have been guilty of all talk and limited action”

He stressed that ” the unmet need for access to justice has led, among other things, to an increase in the number of unrepresented poor and indigent litigants. No one can reasonably suggest that we do not have enough Lawyers in Nigeria. What we have, is a sad situation of too few Lawyers working in public interest.

The legal profession has to help meet that need if it is to retain the central position it is struggling to keep now in our justice system. If the Profession is unable to provide that representation, it will not be long before the question is asked: ‘Why do we need Lawyers?’” 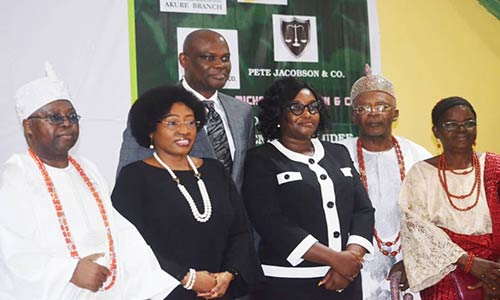 Fapohunda also said that the legal profession should respond to citizen’s perception that Lawyers are only interested in representing high fee-paying clients. He added that this perception gives the impression of a profession that is selfish, self-centered and has lost touch with the concerns of Nigerians.

Fapohunda urged the President of the NBA to take the legal profession in a different direction with different values and a renewed committed to work in the public interest.

The 1st Chief Wole Olanipekun SAN public lecture is one of the activities of the Law Week of the NBA Ikere Branch which began in Ikere Ekiti, yesterday.