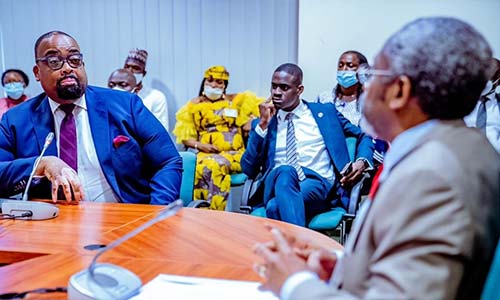 The Nigerian Bar Association (NBA) has collaborated with the House of Representatives to actualize reform of the Nigerian Police against brutality of the citizens.

This is contained in a statement made available to TheNigeriaLawyer (TNL) signed by the NBA National Publicity Secretary, Dr Rapulu Nduka

Nduka said in a meeting by the NBA President, Olumide Akpata, and the Speaker of the House of Reps, Femi Gbajabiamila, it was agreed that a new proposed legislation on police reform will be available on or before November 10

They also agreed to set up an Adhoc panel to work on the issue of Police Brutality, the release of detained protesters, and payment of compensation to victims of police Brutality

#ENDPOLICEBRUTALITY PROTESTS: NBA AND THE HOUSE OF REPRESENTATIVES TO COLLABORATE ON POLICE REFORMS

In line with the recently disclosed immediate, mid and long term plans of the Nigerian Bar Association ( NBA ) by the President, Mr. Olumide Akpata which form part of the NBA’s contribution to the conversations sparked by the ongoing national protests on #EndPoliceBrutality, the NBA President on Wednesday 14th October 2020, met with the Speaker of the House of Representatives, Rt. Hon. Femi Gbajabiamila to explore possible areas of collaboration between the NBA and the House of Representatives ( HoR) towards actualising a holistic reform of the Nigerian Police Force through effective legislation.

At the meeting, it was resolved that the NBA will collaborate with the HoR in the following areas:

1. The NBA and HoR to work on a holistic legislation that will make the Police Force more accountable. This Legislation is to be ready on or before 10th November 2020 for presentation at the floor of the HoR.

The NBA President, in commending some of the initiatives taken by the HoR in light of the protests emphasised the need for the partnership to be a very functional and effective one with clear timelines for execution and immediate results in sight.

The President thanked the Speaker for receiving him in audience and reaffirmed the total commitment of the NBA to the actualisation of the long-needed holistic reform of the Nigerian Police Force.