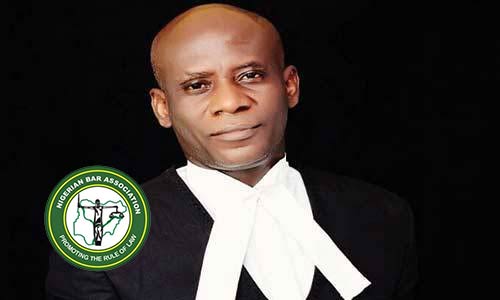 In a statement made available to TheNigeriaLawyer (TNL) signed by Kunle Edun, the National Publicity Secretary of the Association, NBA vows to seek justice for the lawyers. It urges the Inspector General of Police to bring the policemen who perpetrated the evil to book.

Read the full details below/

The attention of the Nigerian Bar Association has been drawn to an unfortunate incident involving some members of the Nigerian Police Force, of the Abia State CP Monitoring Unit, with their office at the Dragon Squad station popularly called Zone 6, Ogbor hill, Aba, wherein they exhibited sheer rascality and lawlessness by attacking three lawyers within the premises of the police station to wit: Victor Onweremadu Esq, Onyemachi Chukwu Esq. and Arinze Celestine Chukwu Esq.

Mr. Victor Onweremadu had been briefed by his client to assist in getting some young men and their father who had earlier been arrested and detained by policemen over an alleged misdemeanour (affray). Mr. Victor requested another of his professional colleague, Onyemachi Chukwu to accompany him to the police station. The young boys were said to have been in detention for three days without bail.

Upon arriving at the police station, the lawyers sought a meeting with the Investigating Police Officer and requested to see the detained boys. While waiting for the young boys to be produced, one of the police officers searched (without permission) one man who brought items to his detained relative in another case. The policemen allegedly discovered a stick of cigarette in the man’s pocket, and the police officer started harassing and battering the said man on the premise that he intended taking the cigarette to one of detainees in the cell. The police men slapped and manhandled the said man, threatening to throw him into the cell.

While Onyemachi Chukwu was outside narrating to another police officer the embarrassment of being ordered out by a police officer, the same police officer that ordered him out rushed towards him on a public road and started hitting him with a big stick and was dragging him into the station, ordering him to kneel down, and when he refused he was swept off his feet and forced to sit down on the floor by the policemen.

Arinze Chukwu Esq who was passing by and witnessed the brutalization of his Colleague had to cross over when he saw what happened and tried to intervene by asking the police officer what transpired. Before he could say Jack, he was given unsolicited blows on his neck which left him gasping for air.

The Nigerian Bar Association condemns the grievous assault on Messrs Victor Onweremadu and Onyemachi Chukwu who were only at the Police Station to perform their professional duties to their clients. And Arinze Chukwu whose only offence was seeing his colleague being brutalised and tried to intervene. The premises of the Police Station is a public place, maintained by tax payers; and there was no evidence that the lawyers did not conduct themselves properly while there. Rather, policemen who are being maintained by tax payers to maintain law and order were the same persons that exhibited lawlessness and unprofessionalism. No policeman has the right to tell any lawyer or any citizen that wants to see his client or relations kept in their custody to leave the station, especially when the lawyer or a relation did not conduct himself in an unprofessional or uncivilized manner.

Moreso, the policemen exhibited a sad picture of the Nigerian Police Force by refusing the detainees to have access to legal representation, and having been detained for more than 3 days, they ought to have been released unconditionally or charged to court within 24 hours.

It is instructive that the Inspector General of Police issued an operational directive to officers of the Nigerian Police Force for the period of the COVID-19 pandemic, that is only in more serious cases like armed robbery, murder and rape that suspects could be arrested and detained. This is to free the detention facility to avoid the spread of COVID-19. Affray is a misdemeanour, not a serious offence; therefore, there was no basis for the arrest and detention of the young men and their father at the CP Monitoring Unit cell of the police station.

The NBA notes that the unwarranted attack on Messrs. Victor Onweremadu, Onyemachi Chukwu and Arinze Chukwu is just one out of the many atrocities alleged to have been committed by some officers of the Nigerian Police Force, who apparently have been seen more in breaking the law, than being law keepers.

Recently, a video went viral of two young boys shot at in Sapele, Delta State allegedly by policemen. Policemen are said to have been seen in markets throwing away foodstuffs of poor traders against the Presidential directives exempting food vendors from the lockdown. These atrocities are legion.

While the NBA would ensure that justice is done in the case of Victor Onweremadu, Onyemachi Chukwu, and Arinze Chukwu we call upon the Inspector General of Police to intervene urgently and place the policemen in question on immediate suspension and disciplinary actions meted on them upon conclusion of investigation. The NBA is ready to assist the Inspector General of Police in this regard.

The NBA urges the citizens to obey all directives on lockdowns during this period.

The NBA further urges the President of the Federal Republic of Nigeria to call the personnel of the security agencies to order. The lockdown declared in certain States by the President of the Federal Republic of Nigeria should not be a basis for security personnel to trample upon the fundamental rights of Nigerians, as provided for in Chapter IV of the 1999 Constitution, as amended. Respect for the rights of Nigerians is now more critical in the face of hunger caused by the prolonged stay at home directive. Everything necessary should be done by government and the security agencies to prevent situations where citizens would be provoked.