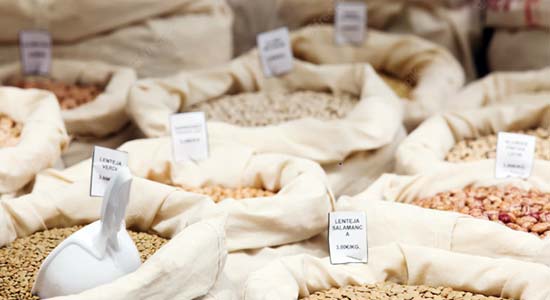 Days after Nigerians woke up to an unusual increase in food commodity prices, reports show that the prices have now collapsed across many major markets in the country., Daily Trust report.

The announcement by the Central Bank of Nigeria to redesign the major denominations of the country’s currency, the naira, triggered a rush for grains by people with large amounts of cash.

The prices of maize, rice, soybeans, millet and others across the different grains markets hit the roof, creating panic in the country.

Our correspondents across the states yesterday, however, reported that prices are now coming down, easing the tension in the value chain industries. In Kano State, our correspondent said the prices of grains in Dawanau International Grains Market were reported as going down.

A grains merchant in the market, Alhaji Danliti Abubakar Gama, told our correspondent that though they were optimistic that the prices would surely crash, but it was not as early as it happened.

He explained that within days after the federal government moved to redesign the naira, the market recorded a sharp increase in commodity prices of about 45% which he described as alarming.

He could not, however, explain the sudden crash in the price of the commodities now, noting that they are currently monitoring the trend to avoid losses.

Another merchant in the market, Alhaji Ibraheem Garba, attributed the crash in the prices of commodities to what is currently happening to the naira-to-dollar exchange rate.

He said ever since the decline in the exchange rate, prices of commodities in the market began to crash.

The two markets are located in Bali LGA, about 250km from Jalingo, Taraba State capital, and is a major centre for farm produce merchants.

At Mutumbiyu, Tella and Iware markets, located not far from Jalingo, the price is higher than what is obtained in Maihula.

Traders interviewed, however, attributed the crash of grain prices to the number of grain merchants coming to purchase farm produce in the area.

Awwal Musa, a trader at Mutumbiyu grains market, told Daily Trust that within a few days, many merchants have trooped to the market and made bulk purchases of farm produce thereby forcing prices to go up.

Daily Trust reports that grain sellers at the Tudun Saibu Market of Soba LGA of Kaduna, and Monday market also in Kaduna, attribute the crash in prices to low patronage and possibly a fall in the dollar to naira rate.

Mallam Sa’idu Aminu Soba, a grains dealer in the market, attributed the sudden fall in prices to lack of patronage and possibly the crash of the dollar rate to the naira.

At the Kaduna Monday market, our correspondent gathered that the price of maize dropped from N23,000 to N19,000 while that of millet remained at N30,000.

“It’s true that the prices of grains are falling and maize in particular dropped from N23,000 per bag last week to N19,000 today. But millet remains at N30,000 per bag ,” said Zakari Yau, a grains dealer at the market.

Customers, however, complained of scarcity of millet and guinea corn in Niger markets.

Some traders and customers spoken to told our customers that the price of rice dropped this week from N51,000 despite the rise in demand.

However, the price of grains is skyrocketing in both local and urban markets in Benue and Nasarawa states.

A check by our correspondent in Benue showed that top on the list of price hike in the state are rice, maize and sorghum.

Benue and Nasarawa are famous in production of tuber crops.

As at Monday afternoon, a bag of locally milled rice sold at Wadata market for N34,000 as against a few days ago when it went for N32,000 per 50kg bag.

The price of maize snowballed to N40,000 per 100kg bag as against N30,000 it was sold last week while sorghum now goes for N35,000 at some markets at the outskirts of the state capital, Makurdi.

A trader, Terkimbi Sandra, said the prices of grains have not crashed but were rather going up by the hours in the state.

However, observers said with the prices going down in major markets in many states, other markets are likely to respond.