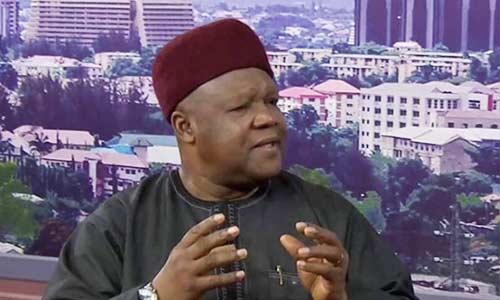 Mailafia, who honoured the DSS invitation for the third time in one month, was allowed to go home at about 2: 50 pm, with cheers from his supporters.

After his release, Mailafia, who spoke to reporters, commended the DSS for their professionalism in the discharge of their duties.

According to him, the DSS exhibited high sense of professionalism in way they handled the matter.

Mailafia urged them to ensure that this should be the last invitation, adding that; l was not, maltreated, harassed or intimated in any guise.

Mailafia, explained that, what l said has nothing to with politics, l only spoke as a free citizen of this country and as such, l am the voice of the thousands of the voiceless of the citizens of this country.

Mailafia, further explained that, ” Muslims and Christian youths have taken and accepted me as their voice, so, l am the voice of the holy martyrs, so if l parish, l parish. God help Nigeria”, he maintained.

However, the Counsel to Mailafia, Barr. Yakubu Bawa, said, although, as a legal, we have examined the case, there is no doubt that the constant invitation by DSS of Dr. Mailafia made him pass through psychological trauma and l hope this should be the last invitation.