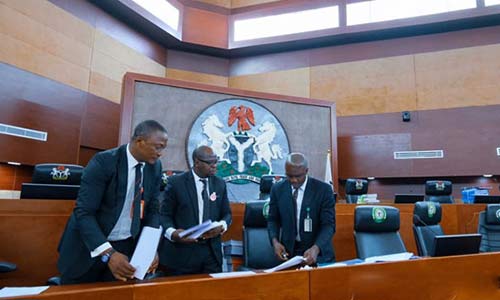 An activist, Sesugh Akume, has dragged to Federal High Court, the Supreme Court and its Registrar, Mrs. Hajaratu Mustapha, for damages of N500,000 for failing to comply with a request brought pursuant to the Freedom of Information Act.

“an order and declaration holding that the respondents have defaulted and breached FoI Act 2011 and thereby committed an offence and are liable to pay the sum of N500,000 for the FoI request they defaulted i.e being the statutory fine for neglecting and refusing to comply with the provisions of the FoI Act 2011.”

In the affidavit he deposed to, the applicant alleged that he made a request on the 20th day of August , 2020, at the Supreme Court, requesting information on the matter of Speaker, Ondo House of Assembly v Martins Alo, a landmark lawsuit.

He asserted that he sought to know the suit number, and its status: whether the matter filed since 2018 had been heard with the judgement granted/not yet granted; or whether it had not been heard with a date fixed/not yet fixed but he got no response whatsoever from the Supreme Court.

Besides, he alleged that he gave them a letter dated 7th day of September, 2020 informing them that they have seven days within which to comply in which they failed to so do.

However, he contended that the defendants have violated Sections 4(a)(b) and 7(5) of the Freedom of Information Act, 2011.

In addition, he urged the Court to order the respondents to comply with his request.