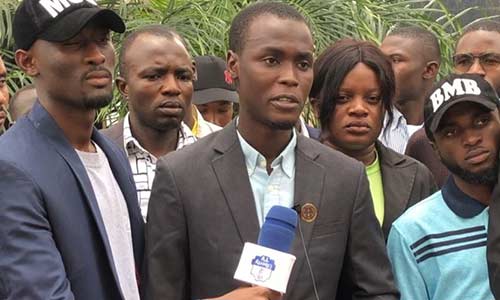 THE Law Students Association of Nigeria has equally witnessed an unprecedented turns of events as the Association is on the verge of balkanization.

The Association concluded its 4th National Convention in Abuja today, which started on 9th day of September, 2020.

However, as the tradition of the Association demands, an election is to be conducted  in the National Convention in order to  usher in a new leadership.

Meanwhile, in the National Election that was earlier on conducted today at about 4AM, the outcome of the process was trailed by controversies.

In this light, in a press conference held at the Zeus Paradise Hotel, Mabushi, Abuja, the spokesperson to the Presidents of some aggrieved Chapters of the Association, Mr. Ishaku Ahmad Danlawan, the Chapter President of Ahmadu Bello University, Zaria declared that the aggrieved Chapters have unanimously resolved to breakaway from LAWSAN pending when their grievances would be addressed.

“Here to present delegations of Chapter Presidents of Faculties of Law across the country. Having met today, at around 9AM or so soon thereafter, we have decided to stand against the sheer and brut injustice that has been happening in our very hallowed, dear Association, LAWSAN.” He said.

Furthermore, he noted that they have several concerns “the blatant and sheer disregard for the Law and structures under LAWSAN particularly section 16(2)(a) of LAWSAN Constitution as amended which talks about a fundamental requirement that a candidate wishing to contest for the position of the President of LAWSAN must be from the penultimate class . In other words, that candidate must be from 400 level. He must present his result of third year, which is 300 level.

“We have observed with sheer dismay and sheer irritability at the blatant disregard for the rule of law, an Association which we hold in a very high regard. An Association which should actually set the pace in following the law and providing adequate respect for the law. We are lawyers in equity and we do not joke with the law.” He said.

Similarly, the UNIABUJA Chapter President, stated that “LAWSAN is still a nascent Association to face such brutality and display of disorderliness”.

In addition, she noted that the presidential aspirant has defaulted in the Law. It was stated that the publicity of that aspirant places him over and above other contestants.

“He used that office as a medium of selling himself to men and women of the congress. That is not just it, when we went for the summit at the NBA Secretariat, we saw bags of his pictures arranged everywhere in the hall.”

Furthermore, she noted that before ban on campaign was lifted he had begun. “This Association is a confederation made up of Chapter Presidents , without the Chapter, there will be no LAWSAN National body.” She concluded.

Similarly, the ABU President stated that the aspirant has been overlapping in the affairs of the outgoing administration not only in the executive but also Senate in many occasions.

“Our concerns have been discussed and passed the following resolutions , that from today, Saturday, 12th September, 2020 that we the fifteen Chapter Presidents of the various Faculties of Law across the regions of the country , that we have unanimously agreed that we are breaking out of the Law Students Association of Nigeria. This is a very painful and decisive decision for us to make”, he said .

In another development, TheNigerialawyer(TNL) speaking with the out going president, Mr. Emmanuel Nwobodo, he noted that the unity of the Association is not negotiable.

“Let me start by saying LAWSAN is for all, it’s not for the minority, not for majority, it’s for all and the unity of our Association cannot be negotiated. It’s an Association that has always stood for unity.” He said.

He noted that the activities of the Association in recent times “is one of the ground breaking events I considered in the history of LAWSAN.”

He stated that credence has been given to the process that brought about the emergence of the new leadership.

Besides, he noted that the selection of the electoral committee was critically done as it was subject to the approval of the Senate of the Association which rejected his nominations several times and he said “the Senate is a mixture of all chapter Presidents  in Nigeria.”

He said subjecting the appointment of the Committee to the Senate “evidences credibility and independence of purpose.

“We brought in a Law to address the issue of independence of the electoral committee to be screened sacrosanctly” before it can be said to be truly independent.

He equally said that he ensured that his administration carries every member of the Association along irrespective of the region.

“This is by far the most credible election ever conducted in the history of LAWSAN and I know Lawsanites are happy because for the first time, the credibility of this Association has been brought to test and we have proven beyond reasonable doubt that we can stand the test when shaken or brought to test.” He said.

In addition, he stated that there were issues as to favouritism of a candidate over others. He noted that these allegations are not true.

“I constituted the conference planning committee at the time one of the aspirants happen to be the FCT Coordinator of LAWSAN and so, his appointment as the leadership of the Committee came upon the fact that he was within the FCT, coordinating the FCT with a view that our convention, we are converging in FCT. At the time when this was done, we never had any pre-discussions, there were no political rancor or what have you”. He said.

In addition, he stated that he was equally approached by one of the presidential aspirants, Mr. Frank Justice and there was an issue as to his eligibility to contest, so he said “what our Laws provide for in relation to eligibility to contest is that one, you must have served in LAWSAN at the apex level, two, or you must have attended a LAWSAN National Convention. So, I saw the level of passion and input he was willing to offer and seeing this, knowing fully well what he had to bring to the table, I gave the instruction for appointment to be made to him, just last month.”

Also, he noted that his administration gave life to his eligibility to contest the election “for credibility of purpose”. He said the effort is in order to ensure a fair level playing ground to contest.

However, he stated that other requirements aspirants are to meet is subject to the power of LECOM without any interference.

While responding to what he planned to do in order to assuage the concerns of the aggrieved Chapters, he said:

“When I was elected, we had the same issue. The responsibility vested upon me at the time to ensure that we get other Chapters involved to such an extent that I took the risk to go to my opponent’s Chapter..”

Therefore, he stated that it is the responsibility of the LAWSAN President-elect to ensure that the unity of the Association continues to be restored.

Meanwhile, the Public Relations Officer (PRO) of the Law Students Association of Nigeria Electoral Committee(LECOM), Mr. M.O Zubair noted that the election was not marred by irregularities as alleged.

“The election process started at about 2;30am, of which all aspirants were screened as to the qualifications in line with the Provision of the LAWSAN CONSTITUTION.

“In line with the provisions of Section(s) 15(2)(b) which requires the Candidate varying for the office of PRESIDENT to have a particular CGPA before he/she could qualified to contest for such office.

“We discovered that one FRANK JUSTICE who was one of the aspirants for the office of the PRESIDENT, funished us with a “RESULT” which Reads 2017/2018.  Not alone was he given a benefit of doubt, but also he was given a reasonable time (1h: 14min) to provide us with a genuine result. All agents of all the aspirants for the offices including his agent would attest to that. Hence, the need for his disqualifications.” He said.

Furthermore, he noted that the election was free and fair and conducted in the presence of necessary parties.

“Votes counting started at about 6;55am, in the presence of all agents and security operatives.Hence, the following candidates having scored the highest vote, are hereby declared winners:

Finally, the PRO restated that the election was free, fair and credible.