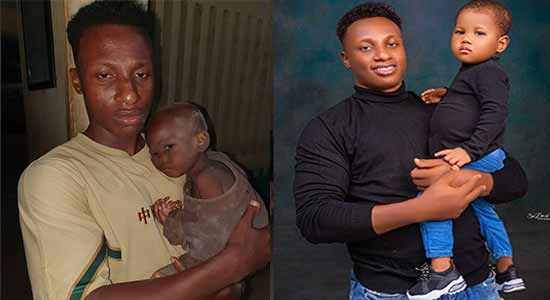 A Law graduate, Benkingsley Nwashara, has taken to his Twitter handle to share photos of a two-year-old girl he rescued after she was abandoned by her mentally-ill mother in Agabani town, Nkanu West Local Government Area, Enugu State.

He shared photos he took of the child when he rescued her, as well as a recent photo of the two of them on Sunday.

Nwashara in an interview with Saturday PUNCH on 2nd July 2022 said he saw the child sitting helplessly on the street on June 15,2022 while returning from a late-night party with some friends, and that when he asked about the child, he was told that she belonged to a mentally-ill woman who lived in the area and had been there for about days without any help.

This must have been around 9.40pm or so. Some of my friends thought it was a snake, so I turned on my phone torch and beamed the light on the area to be sure of what it was. That was when I saw that it was a child sitting helplessly on the street.

“I first asked around the area and they told me that the child belong to a mentally-ill woman who stayed in the area and she (the child) must be around two years old and had been there for like three days without any help. The mother, too, had not been coming around. In fact, they said the mentally-ill woman just gave birth to another child some days earlier and had not been seen since then. On hearing this, I just knew I couldn’t let her stay there. It had started to drizzle as it had been raining non-stop for days in Enugu. I couldn’t imagine how this child had survived these rains without any shelter. It saddened me. I beamed my light on her again and her eyes shone. It was filled with hope that a helper had come. I quickly called my girlfriend and told her about what had happened and she told me to quickly take the child to the police station first, which I did; (but) the policewomen on duty told me that there was nothing they could do that night. They encouraged me to take the child home and come back the next day to make a formal report of what happened. So, with the backing of the officers, I decided to take the little girl home with me.

“The next day, I took her to a paediatric hospital and they told me that she needed urgent medical attention as she would be put in the Intensive Care Unit for close monitoring. I had to make sure I was there for her. Since I knew it would affect my job, I told my boss that I would need some time off. Later on, I just tendered my resignation. This child, for now, is my priority. I have to be with her 24/7, so I am sure she is okay. I also had to hire someone who would help me with the things I can’t do for her”.

Sharing further light on how the journey had been, Nwashara explained the difficulty associated with taking care of a person (child in context), including the surmounting financial challenges, but also appreciated well-meaning Nigerians who reached out to him through the social media and generously donated both financial and material support where possible.

“To date, no one has come to say they know how to get to any of the family members of the mentally-ill woman. In fact, my thought then was that when I see any of her family members, I would sue them for neglect and child abuse. They know full well that the mentally-ill woman cannot raise a child; why leave her with a child for two whole years? Now, she has given birth to another one and vanished. Only God knows where she and that newborn are as we speak.

“I went to meet the Local Government Chairman of Nkanu West Local Government Area. He invited me and we spoke with the child welfare services but they still insisted that I kept the child for now. The chairman couldn’t believe that this was going on in his (local area). He was almost moved to tears. They said they wouldn’t know how to care for the child because she was too fragile and needed a lot of special care, which only I could give since I had shown interest. They also gave me some money to add to what I have to take care of the child. The DPO of Agbani Police Station, where I had gone to make a report the night I found the child, later called me. When he heard my story, he was also moved and still told me to continue to raise the child and bring reports to him. He is a father himself and he was supportive. He attached an escort to us and always called to make sure I was okay”.

When asked if he contacted any orphanage that could take custody of the child, Nwashara noted that most orphanage contacted were scared for the child’s life and safety due to the condition and the state the child was when she was found.

“I am still very young. I don’t have a child now but I wish to have one when I need one and I wouldn’t want any of them to go through what this little girl has gone through in this life. Honestly, I saw hope in her eyes that night I saw her. In fact, it felt like it was divine. I knew it was orchestrated by God for us to meet that way so I would save that child. I have always loved kids, being a teacher in the children’s department of the Anglican Church.

“All I have in my mind is to revitalise that child and make sure she is alive. I want her to get a good family who will care for her and give her the best life she deserves. People have been reaching out to me to give her up for adoption but that is not in my powers to do right now. But for now, she is going to be under my direct supervision. Since even the orphanage and government have told me to take care of her, I would do so till I am sure she is safe with whoever decides to take her in as theirs.

“One important thing this has taught me is to always do the right thing irrespective of what anyone thinks or does. I have also decided to open a foundation for abandoned and indigent kids who need help so I would be a ray of hope for them

“The government needs to do more to make sure that we don’t have these cases of neglect and abandonment anymore. The mentally-ill woman who has also gone missing is also a cause of concern to me. For her to be giving birth means that there are people who are impregnating her. It is a terrible cycle for these people, and the government needs to be more intentional. Society should also be kinder to these children because they are the ones that may end up as the elements of crime if they are not taken care of at this stage”.

Sharing the latest update about the child’s welfare, he captioned the pictures, “How it was vs How it’s going. You can’t tell me that God is not faithful.”

How it was vs How it’s going

You can’t tell me that God is not faithful. pic.twitter.com/fHQGxC83lq

In another post, he shared some pictures of the child on Monday and said, “She went from being an abandoned child diagnosed with kwashiorkor to being plump and with a home and family. God is the greatest.”

She went from being an abandoned child diagnosed with Kwashiokor to being plump and with a home and family.

God is the greatest. pic.twitter.com/7HslnOcy4p