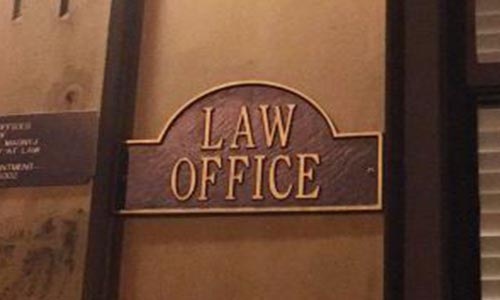 A law firm has denied selling some assets it was engaged by the Attorney-General of the Federation (AGF) and Minister of Justice, Abubakar Malami, to recover on behalf of the federal government.

Mr Malami had secretly awarded a multiple-billion naira assets recovery contract to Gerry Ikputu and Partners, an estate valuer, which further engaged the law firm, M. E. Sheriff & Co, as its agent, to recover identified large expanses of land and buildings said to be belonging to the federal government.

Recall that the said assets are located in 10 states and the Federal Capital Territory (FCT), Abuja.

Gerry Ikputu and Partners will be entitled to three (3) per cent of the worth of every successful recovery, Mr Malami’s letter awarding them the contract stated a secrecy clause that bars them from making the details of the work public.

But the news broke on Friday over EFCC’s arrest and interrogation of Ladidi Mohammed, head of the Asset Recovery Management Unit (ARMU) of the Federal Ministry of Justice, which is to work with the firms in recovering the properties.

Mrs Mohammed’s interrogation by the EFCC was reportedly based on the alleged sale of the recovered assets by Gerry Ikputu and Partners and M.E Sherriff & Co.

However, the principal partner of M.E Sherriff and Co, Mohammed Sheriff, said the recovered assets had not been disposed of.

While reacting to the media report linking him to the sale of the recovered assets, on Sunday, Mr Sherriff said his company had no dealings with the ARMU.

Mr Sherriff, who said his firm had yet to be paid for its services since none of the recovered assets has been sold, disclosed that one of the affected properties located in Osborne Road, Ikoyi, Lagos, was unlawfully occupied by a company after the expiration of its lease agreement.

He explained that based on Mr Malami’s instruction, his firm (M. E Sherriff & Co) successfully secured an order of final forfeiture of the affected properties.

The forfeiture order was granted by Inyang Ekwo, a judge of the Federal High Court in Abuja, according to Mr Shefiff.

“We did not even know that there is an Asset Recovery Management Unit. Our involvement was in relation to the tracing and recovery of abandoned federal government properties that were being occupied illegally, based on the presentation by some people, who approached our firm,” Mr Sheriff said.

He added that based on the AGF’s introduction, his firm went before the Federal High Court in Abuja, to get an interim order of forfeiture and later got a final fortune order on some of the properties, which were yet to be sold.

The lawyer said: “On the 8th day of October 2021, the Federal Government of Nigeria granted the request of the firm of Jerry Ikputu & Partners to trace, recover and submit the abandoned Federal Government properties in eleven states of the federation.

“Further to the above, on the 16th November 2021 Honourable Justice I.E Ekwo of the Federal High Court of Abuja granted the reliefs of M.E Sheriff of M.E Sheriff & Co and forfeited temporarily assets to the Federal Government of Nigeria all assets as listed on the instruction letter referred above.

“The Honourable Justice I.E Ekwo also ordered the federal government to make a publication of the said temporary forfeiture inviting all persons /bodies to, within 14 days of the order, show cause why order of final forfeiture should not be made forfeiting the properties to the Federal Republic of Nigeria.

“The federal government, by way of complying with the court’s order, made a publication in the Punch newspaper of the 18th day of November 2021, specifically at page 34.

“The court, after giving members of the public opportunity to express interest in any of the federal government and the fact that no individual laid any claim, granted a final forfeiture in favour of the Federal Government of Nigeria on the 31st January 2022.

“Anybody claiming any sale arising from the recovered assets is by this publication invited to present a petition to the office of Honourable Attorney General of the Federation (HAGF) or Economic Financial Crimes Commission (EFCC),” Mr Sheriff said.

Lawyers and anti-corruption campaigners had expressed concerns about the secrecy of the asset recovery contract.

In an earlier interview with this newspaper, a professor of law and Senior Advocate of Nigeria, Itse Sagay, said there was no justification for engaging private firms to execute the recovery the anti-graft agencies were competent to do.

“The EFCC and the ICPC are authorised to recover stolen public assets. So, there is absolutely no justification for hiring a third party to do what government agencies have powers and experience to do,” Mr Sagay, who chairs the Presidential Advisory Committee Against Corruption (PACAC) said.

“So, it is strange for an outside agency, who does not have that record, and will have to be paid to recover the property. That shouldn’t be; it’s wrong. That doesn’t make sense,” Mr Sagay added.

Debo Adeniran, the chairperson of the Centre for Anti-corruption and Open Leadership (CACOL), said the contract award to Gerry Ikputu and Partners “amounts to duplication of efforts and government expenditure.”

“Mr Malami prefers giving jobs meant for government agencies to his friends and cronies so that every public transaction will be shrouded in secrecy. That is why he has awarded this contract to the private company,” Mr Adediran added.

The Executive Director of CISLAC and Head of Transparency International in Nigeria, Auwal Rafsanjani, had described the contract as a waste of taxpayers’ money.

He blamed the development on the “inability of the federal government to bring about a legal framework for the management of recovered stolen assets nearly seven years after Mr Buhari assumed office”.

But Mr Sherriff said it was not within the powers of the EFCC to recover assets that had been traced by Gerry Ikputu and Partners.