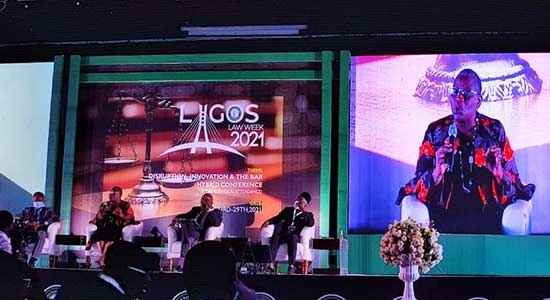 Public Policy Analyst and Co-Founder of the Bring Back our Girls movement, Dr. Obiageli Ezekwesili has knocked the Nigerian Bar Association for failing to call the Attorney General of the Federation to order over what she considers to be an unacceptable disrespect for due process and the rule of law in Nigeria under his watch.

Dr Ezekwesili, who spoke at the ongoing Law Week of the NBA, Lagos Branch as a Panelist on the session on “National Security and our Fundamental Rights” noted that she was reluctant in deciding whether or not to attend the Law Week when she received the invitation of the NBA because the NBA has been sitting to watch the actions of the AGF in the face of human rights and rule of law violations in the Country.

Dr. Ezekwesili started her presentation by giving a definition of national security noting that national security is centered around the citizens and not around the security of President’s ego. Dr. Ezekwesili said this while reacting to the ban on Twitter in Nigeria by the Nigerian Federal Government following the removal of a Tweet made by President Muhammadu Buhari which violated the Rules of Twitter.

Dr. Ezekwesili observed that the President breached the Rule and was sanctioned like every other user of the platform and in a sheer display of Ego and bravado elected to ban the use of Twitter by Nigerian Citizens. Dr. Ezekwesili then berated the NBA for not taking proactive steps to call the Attorney General of the Federation to order. According to her “the Attorney General of the Federation had the audacity to say will prosecute anybody who uses Tweeter. In what Country? To us as citizens of this country?”

Dr. Ezekwesili, therefore, charged the NBA Lagos Branch to see the Law Week as an avenue to take away a vital call to action. She noted that Nigerian Lawyers must be at the forefront of the fight against the irresponsibility of the present government and lawyers cannot afford to sit in their comfort zone as doing so will only lead Nigeria into further socio-economic depression.