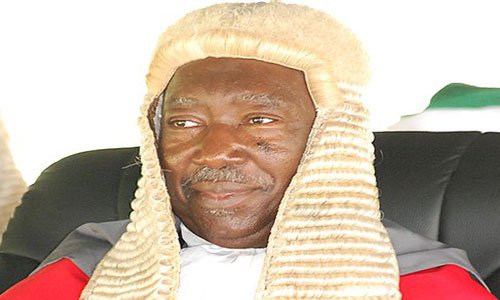 Barely a week after the death of the President of Kogi State Customary Court of Appeal, Justice Shuaib Atadoga, threw the judiciary into mourning, the Chief Judge of the state, Justice Nasiru Ajanah, is dead.

Sources close to the family said the High Court judge had been sick and was taken to an undisclosed Hospital in Abuja where he was receiving treatment untill his death on Sunday.

He hailed from Okehi local government council of Kogi State. Justice Nasiru Ajanah died at the age of 64 years.

Ajana was born in Okene local government council to the family of MJ Fari Ajanah. He received early education at the Native Authority (Central) Primary School, Okene between 1962 and 1968. In 1969, he enrolled in Federal Government College, Keffi and graduated in 1973.

In 1974, Ajana enrolled in the same college for a Higher School Certificate (HSC) and graduated in 1975.

He later procceded to Ahmadu Bello University, Zaria where he obtained LLB degree in Law and attended Nigerian Law School and was subsequently called to the Nigerian Bar as a Barrister and Solicitor of the Supreme Court of Nigeria.

Ajana legal career started at the Kwara State Ministry of Justice where he served as State Counsel (1982-1984). In 1984, he established his own private firm, Nasiru Ajana & Co in Okene until 1989 when he was appointed a Judge of Kwara State High Court. He was transferred to Kogi State after its creation in 1991.

Before his appointment as Chief Judge of Kogi State, Ajana had served in different capacities. In 1994, Ajana served on the Kabba disturbance tribunal in Kogi State as Chairman.