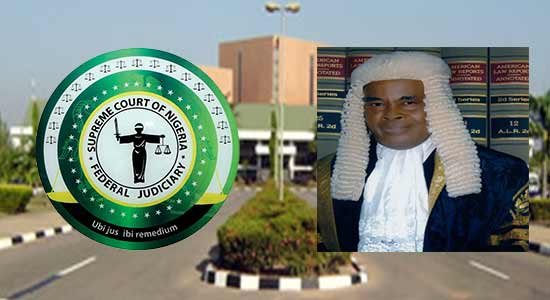 All is not well with the funeral programme released in respect of Justice Sylvester Nwali Ngwuta of the Supreme Court of Nigeria, who died recently, as the Ngwuta Njoku family of Amofia Ukawu in Onicha Local Government Area of Ebonyi State.

The eminent jurist had died in Abuja on March 7, 2021 and a funeral committee headed by Chief Kanu Agabi, SAN was constituted which fixed April 30 for the burial.

Daily Sun, Not TheNigerialawyer exclusively gathered that the family’s grouse was their not being carried along in the burial arrangements including fixing of date; hence, they threatened not to be part of the activities.

A petition dated April 9, 2021, by the chief mourner, Stephen Ngwuta, Chief Emmanuel Nwali Ede, and eight others, asked that the family be allowed to choose the date for the burial of their son in line with extant customs and tradition.

Promising to forward a suitable date to the CJN within two weeks from the date of their letter, they also demanded that the family be represented in any burial committee constituted by the Supreme Court or at the state level.

They also thanked the CJN and Agabi, a close friend of Ngwuta for their support in the family’s trying time.

Part of the petition stated: “While our family was still consulting and trying to reach a decision on the traditional rites for the burial, suddenly, a delegation of five people came into Ebonyi and visited the family house of Justice Ngwuta even without prior notice to the family. The delegation which was led by someone who was said to be a retired Director of the Supreme Court, one Mr. Unaigwe and one Mrs Okeke only came to give information on concluded arrangements without the involvement of our family.

“The next thing we heard from another source was that date of burial was already fixed for 30th April, 2021. We have not received any formal communication from the Supreme Court of Nigeria or any representation from the Court on the burial. While our family is still considering a suitable date in line with our customs and tradition, some individuals in Abuja are planning and circulating notice of burial that we have no input.”