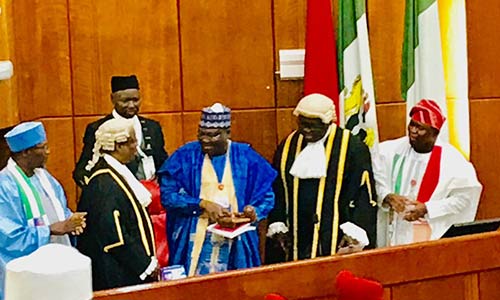 A senator representing Yobe North Constituency, Ahmed Lawan, has been elected President of the 9th Senate.

107 Senators voted in the election.

The result of the Senate Presidency election shows that at least 17 Peoples Democratic Party lawmakers voted for Senate President Ahmed Lawan in disregard of the directive of the PDP leadership that Ali Ndume should be elected as Senate President.

The All Progressives Congress has 62 lawmakers while the opposition PDP has 44 and Young Democratic Party has one.

However, Lawan polled 79 votes while Ndume scored only 28 votes.

Lawan had during his campaign met with some of his colleagues in the PDP and negotiated with them.