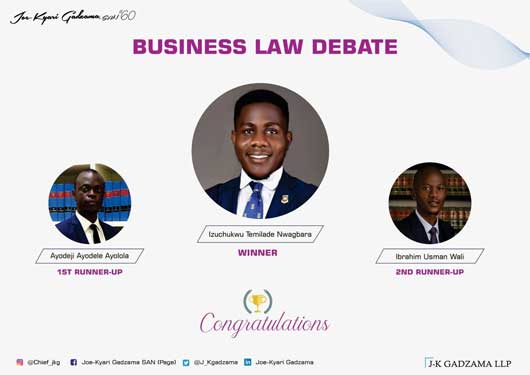 The finals of the J-K Gadzama SAN Business law debate were held yesterday, Tuesday, November 23, 2021. After a long and well-battled competition, the Judges retreated into a deliberation room for about 30 minutes to decide who won.

After the Judges returned, the Presiding Judge, Mr Kehinde Ogunwumiju SAN began the announcement. He informed the participants that Mr Usman Ibrahim Wali was the 2nd Runner-Up after edging Mr Adeyemi Kehinde Ayeku in the third-place debate.

In his remarks, the host, Joe-Kyari Gadzama SAN appreciated the efforts of all the participants and thanked them for showing wit and skill at all stages of the debate. He also stated that he was proud of the participants and went on to inform them that they would all be appreciated for their efforts in the competition. He also promised that the person who came fourth would be specially recognised.

We gather that the event was well attended and lauded by attendees as a great initiative.