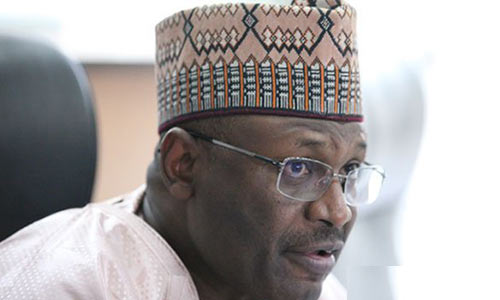 This comes about three months after the candidate of the All Progressives Congress (APC), David Lyon, was returned elected as the winner of the November 16, 2019 poll.

In the new result released at the INEC headquarters in Abuja on Friday, the electoral umpire, however, excluded the APC from the result sheet.

INEC Chairman, Professor Mahmood Yakubu, told a news conference that the commission took the decision after the Supreme Court sack Lyon as the governor-elect of the state.

He said, “The commission has received the Certified True Copy (CTC) of the judgement of the apex court which disqualified the deputy governorship candidate and vitiated the joint ticket of the party earlier declared winner in the election.

“The court also ordered the commission to “…declare as winner of the governorship election in Bayelsa State the candidate with the highest number of lawful votes cast with the requisite constitutional (or geographical spread)”.

In compliance with the orders of the court, Yakubu revealed that INEC convened a meeting to review the result of the election in which 45 political parties contested.

Without the votes scored by the APC, he put the total number of lawful and valid votes cast in the election at 146,999.

Out of this figure, the INEC chairman stated that the candidate of the Peoples Democratic Party (PDP), Senator Douye Diri, scored the highest number of lawful votes with 143,172.

He added that the party scored more than 25 per cent of the lawful votes cast in all the eight Local Government Areas of the state.

According to the INEC boss, the total number of registered voters in places where the election was not held or cancelled as a result of sundry violations is 90,822 while the candidate of the Accord party has the next highest score with 1,339 votes.

“The margin of lead between the candidates of the PDP and the Accord party is 141,833 votes. With this outcome, the election is conclusive at first ballot.

“Consequently, Senator Douye Diri and Senator Lawrence Ewhrudjakpo of the PDP are hereby declared winners and returned elected as governor and deputy governor of Bayelsa State respectively,” he declared.

Yakubu noted that the tenure of the incumbent governor of Bayelsa State, Seriake Dickson, would end at midnight on February 14, 2020.

Thereafter, the governor and deputy governor-elect were presented with the Certificates of Return, in line with Section 75 of the Electoral Act 2010 (as amended).

See the full list of the result as released by INEC below: 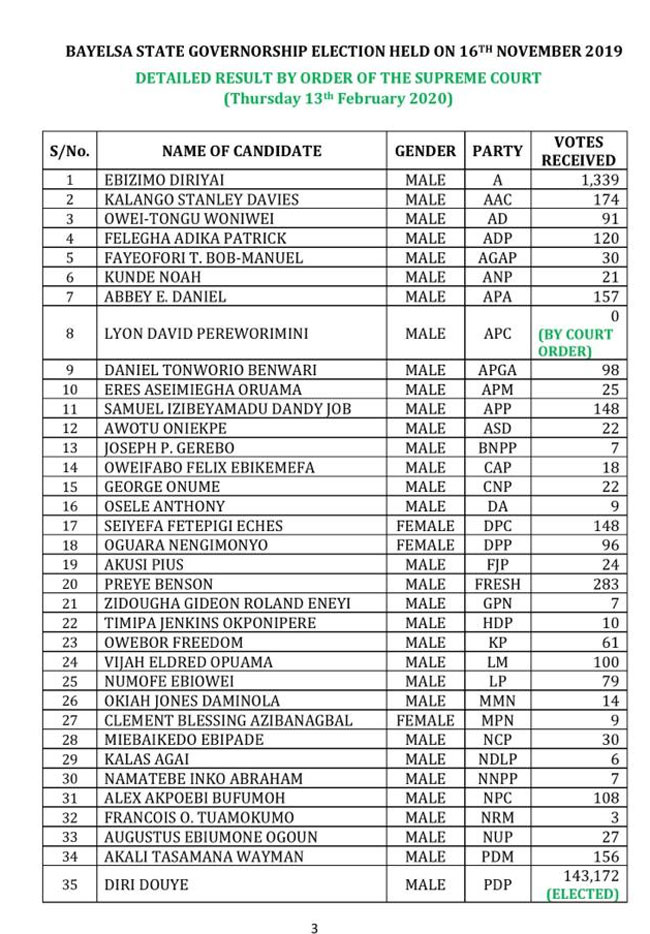 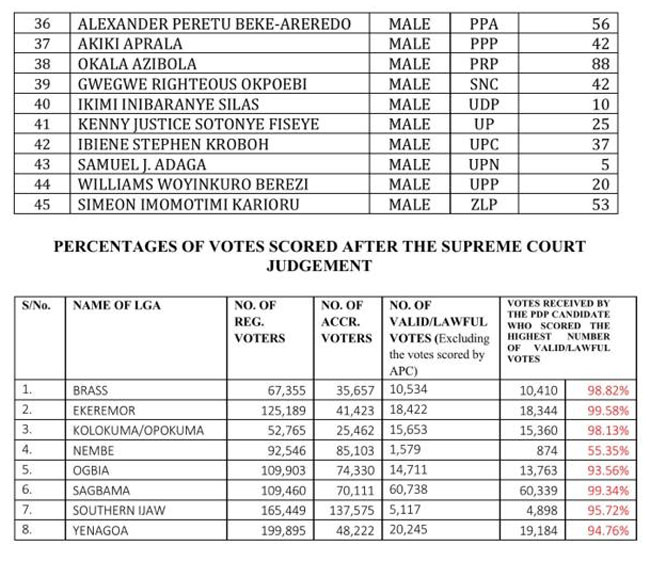