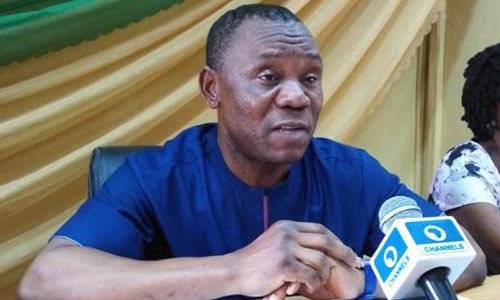 Briyia said his preliminary investigations revealed that the report that he was sacked by the commission was fake saying that he only resigned his appointment to join partisan politics and participate in the forthcoming governorship election in Bayelsa State.

Speaking at the secretariat of the All Progressives Congress (APC) in Yenagoa, Briyia said he was at the party office to inform the officials that he was a registered member of the party and intended to contest the forthcoming poll.

There were reports that INEC sacked the former REC for using its premises in Cross River to declare his membership of the APC.

But Briyia said: “No, INEC did not say so. INEC never meant to say so. I officially and legally resigned my appointment and INEC will attest to that. Let me state this. The REC is nominated by the President and the President sends the nominees to the Senate.

“It thereafter the President only, can sanction the REC. I have contacted INEC headquarters and the news about my sack is fake news. INEC said they didn’t say a thing like that. I’m sure you have watched or maybe read INEC publication, you won’t find anything like sack because I resigned officially.

“My departure created a vacuum and in INEC tradition the moment there’s no REC the administrative secretary takes over, that was what INEC meant. INEC doesn’t mean that I was sacked. So, don’t misquote INEC”.

Briyia said he had mapped out robust programmes for Bayelsa adding that if he became the governor of the state he would focus on human capacity and infrastructural development.

He said the people of the state were generally unemployed lamenting that most of them could no longer go to school.

The aspirant observed that civil servants were not re Irving their full salaries while most pensioners were languishing without their pensions.

He said: “I came because the good people of Bayelsa state called me to come and contest the gubernatorial election. We have insecurity in this state and insecurity has so many factors that cause them.

“When we identify those factors, we intend that God helping us after the gubernatorial election, we are going to turn this state around for the betterment of everybody that’s living in this state, whether you are indigenes or non-indigenes.

“As a matter of fact, Bayelsa state is the list developed, in terms of human capacity and infrastructural development. Bayelsa state is the smallest and wealthiest of these states. That was the reason they asked me to come and contest because they found worthy and capable of turning this state around”.