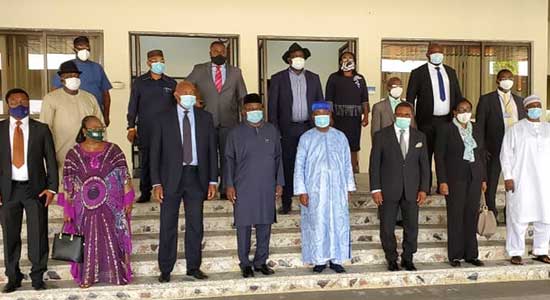 The building of a workable synergy between the Executive and the Judiciary at all levels of government will promote corporate governance and will further enrich the beauty of democracy.

On Thursday 21st January 2021, the Hon. President of the National Industrial Court, His Lordship, Hon. Justice Benedict Kanyip PhD, FNIALS led judges and principal officers of the court on a courtesy visit to the Executive Governor of Akwa Ibom State, His Excellency, Udom Gabriel Emmanuel in a bid to partner the state on efficient justice delivery.

In his remark, the Hon President said the courtesy call became important to keep the State Government abreast about Uyo Judicial division permanent site developmental project embark upon by the court to ease administration of justice for the people of the state and its environs.

The Executive Governor of the state ably represented by his deputy, His Excellency, Engr Moses Ekpo expressed appreciation to the Hon. President and entourage for the unique visitation and for finding Akwa Ibom as their first choice destination for their retreat that the state’s hospitality can be compared to none and voiced the State government’s readiness to partner with the judiciary.

Speaking further, he said the governor has mandated the Attorney general to liaise with the court to identify possible ways the state can be of help to the court in a bid to improve the Justice delivery system and to promote industrial harmony for the people of the state that the governor as a promise keeper will fulfill his promise.

Their Lordships, Justice F. I. Kola-Olalere, Justice O. A. Obaseki-Osaghae, Justice M. A. Namtari, and Justice I. J. Essien were part of the Hon. President’s entourage.