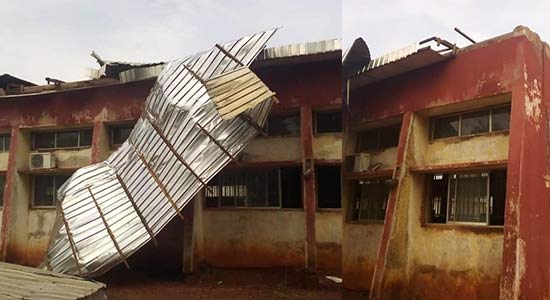 It was an eyesore as THENIGERIALAWYER took a tour on the Otuocha High Court in Anambra State which covers the Jurisdiction of the Governor of the State. It is dangerous, disheartening, and sad that a High Court of such nature still exists in Nigeria.

Needless to say that it is one out of many! What should one expect when the Financial Autonomy for State Judiciary has not been implemented?

The Infrastructure which is called a High Court is not habitable. No villager would want to take that structure for Kitchen, talk more of taking it as a place for community gathering. The structure is dilapidated, tattered, and may even habour dangerous animals. One would ask; Is such a place fit and suitable for Justice delivery? It is not at all with all sense of responsibility! Justice cannot be achieved in such a place where Justice has not been literarily accorded.

The ugliest part of the situation is that the Governor of Anambra State His Excellency Chief Willie Obiano hails from the same village where this good for nothing and forsaken building called a High Court is situated. What a pity that a Governor would care-less about the Judiciary which is the last hope of the common man which gave him the power and privileges he enjoys. What a tragedy that  Judges and Lawyers would sit in that death trap to administer Justice.

Justice delivery is not only the proceedings and Judgment that is obtained in the Court, it entails the Structure and Facilities therein. How on earth could such a building which is no more than a Kitchen be called a High Court? How on Earth could Justice be reasonably and comfortably be delivered in such a Justice forsaken building called a High Court? It is high time we tell ourselves the truth and pragmatically attend to the problem of the Judiciary. The Judiciary must not be turned into a puppet because it wants to embark on renovating a court or changing the leaking roof on a court building. They must be allowed to do it themselves. They must be allowed to create erect and furnish habitable buildings for the dispensation of Justice herself!

It is indeed an eyesore, a tragedy and a betrayal of trust and power entrusted on the Executive by the people.

Our Court must never again be left at the mercy of the Executive, it must from henceforth wear a new look, it must Justice fitted. We must allow the Judiciary to handle her problem in her own way, it must be allowed to erect structures, put necessary Facilities in place and implement her policies herself. Our Courts must never again appear sorry!