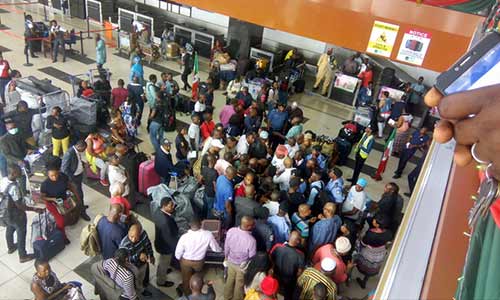 There is currently chaos at all arrival points of international airports in Nigeria especially the Murtala Muhammed International Airport, Lagos, following the breakdown of the portal of Innovate One, the concessionaire to the Nigeria Immigration Service.

The chaos was also caused due to inadequate equipment supplied by the concessionaire and the immigration service to serve arriving passengers.

Foreign travellers on visa on arrival entering the country through the international gateways were made to spend at least extra four hours processing their documents at the immigration desk.

The Nigerian Government had on Monday last week introduced additional charges of $90 as biometrics on each foreign traveller coming into the country.

This amount is however, different from the visa fees, which vary from one country to another and the mandatory $20 as service charge to Innovate One that collects all charges on behalf of the service.

But since the new regime began last Monday, several problems had been recorded at all international gateways into the country.

It however, reached a peak on Sunday and Monday when hundreds of passengers arriving the international airport in Lagos had to depart the terminal without collecting their international passports.

The foreigners, numbering over 100, were told to return to the airport the next day for the collection of their documents and were also given a receipt each to indicate their passports were still with the immigration.

Each of the foreign airlines arrived Nigeria with at least 10 foreigners requiring visa on arrival, apart from the $90 biometrics, which is compulsory for all foreigners.

For instance, on Sunday, South African Airways arrived Nigeria with 19 foreign passengers that needed visa on arrival, while on Monday,18 foreigners arrived the country with it and required the same process.

This is however, apart from the other international carriers that came to Nigeria with foreigners needing visa on arrival.

In all, at least 150 foreigners who require visa on arrival are affected daily.

It has been the same sordid experience at other international airports like Abuja, Kano and Port Harcourt since the new policy was introduced.

A source close to immigration, who didn’t want his name in print because he was not allowed to speak on the issue, confided in our correspondent that despite the introduction of new services by the government in recent time, Innovate One was yet to upgrade its portal to match the new demands and challenge.

The source added that the current situation also added to the workload of immigration personnel at the nation’s airports and wanted the government to intervene in the running and contracts given out by top management staff of immigration.

The source said, “On Sunday and Monday, foreigners arriving the country spent at least four hours at the immigration desks over visa on arrival and biometrics fees. There was a serious chaos at the arrival terminal of the Lagos airport on Sunday night.

“The system crashed completely at the airport this Sunday and it continued till date. Some passengers arrived the airport few minutes to 8pm, but they didn’t leave until past 12am. The system collapse is giving the immigration officers additional workload to the workers.

“Unfortunately for some of these passengers, they had paid online before coming to Nigeria, got approval before coming, but the immigration officers at the airport still commenced another process of capturing for them.

“However, immigration and its concessionaire have inadequate system at the airports. There was only one system for the capturing of all foreigners, which further made the work tedious. Though, there were about five systems at the arrival terminal, they all served different purposes. Only one personnel also attended to each of the travellers.”