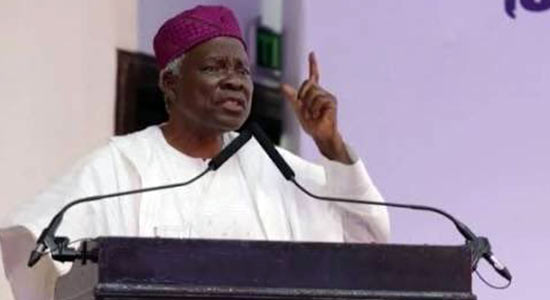 In an interview with The PUNCH on Wednesday, the historian asked people of the Yoruba race and Nigerians to prepare to defend themselves against herdsmen.

The Yoruba elder wondered why the Federal Government had refused to prosecute many Fulani herdsmen engaging in criminal activities.

He said, “The Presidency is now initiating a very dangerous doctrine of governance in Nigeria. The presidency is now saying that the state’s authority no longer includes the security of the people of the state.

“That is not only bad but dangerous to the existence of Nigeria. It is an assessment of the quality of governance in Nigeria by the rest of the world.

“All Nigerians who are being assaulted, raped, and killed by the Fulani must defend themselves; not only Yorubas or those living in Ondo. If we continue to wait for the Federal Government, these herdsmen will kill all of us. We must rise to defend ourselves.

“The Nigerian government has shown again that it is working for the Fulani. I don’t think anybody should be afraid to say that because it is the truth. The Fulani has been committing crimes on a massive scale since 2015 in Nigeria.

“The government has never owned up that they are committing the crime. They have been going around kidnapping, killing people, and destroying farms, properties, and villages on a persistent scale and those things are crimes under the laws of Nigeria. In some parts of the country, it looks as if the army is colluding with them (herdsmen).”

“Akeredolu should be commended for his decision, for his courage and show of knowledge of the land. We support what he is doing. We are waiting for what government would come and do in Ondo State,” he added.