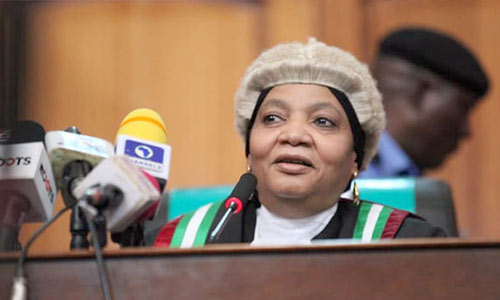 The outgoing President of the Court of Appeal, Justice Zainab Bulkachuwa, has said she will spend her retirement advocating girl-child education.

She said had her father not given her a chance to go to school she would not have been able to fulfill her dream or attain her potential.

Justice Bulkachuwa, according to a statement on Wednesday, said this when she paid a courtesy visit to the Governor of Lagos State, Mr Babajide Sanwo-Olu, at the Lagos House, Marina.

She was accompanied on the visit by other Court of Appeal Justices.

She added that despite retiring, she would not cease to be a part of the judicial system, adding that she had no fear that her legacies would endure because she had mentored many judges.

“I will still be with my sisters and brothers in the Supreme Court, Court of Appeal and high courts. I have mentored so many young judicial officers and upcoming lawyers to carry on the legacies. I will still be part of the judicial system despite my retirement,” she said.

Sanwo-Olu congratulated Bulkachuwa on her successful career, noting that despite clocking 70 years, she looked only 50 years old.

The government pledged the commitment of his administration to respect for the rule of law and the principles of separation of powers.

Sanwo-Olu said, “Government in Lagos State is committed to ensuring that we all live within the ambit of the law. We will continue to engage the judiciary as an independent arm of the government. All of us in the executive arm will continue to uphold the tenet of the constitution that we swore to, in our ways and deeds. We will not run afoul of the law or any pronouncement of the court.”