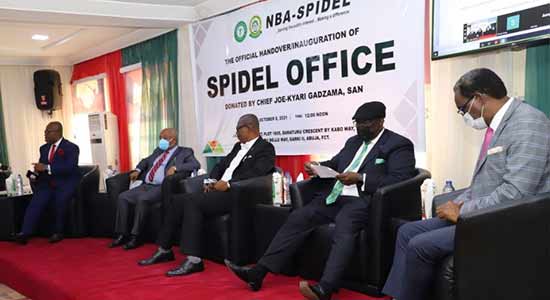 *Prof Paul Ananaba–  SPIDEL has made progress.
*SPIDEL Will  becomes a section every lawyer will crave to join– Dr. Ubani

The Nigerian Bar Association Section on Public Interest and Development Law(SPIDEL), on Friday, commissioned its new office in Abuja.

It is an office space donated by the Pioneer Chairman of NBA SPIDEL, Chief J-K Gadzama, SAN and it is located at J-K Gadzama Court.

Speaking, at the inaugural event, Chief J-K Gadzama, SAN, said, the space project being commissioned is among the very many humble initiatives towards supporting the NBA’s desire of ensuring the maintenance of public law and order.

“The NBA SPIDEL office space project being commissioned today is among the very many humble initiatives towards supporting the NBA’s desire of ensuring the maintenance of public law and order. This is the fulcrum upon which societal development, innovations, and economic prosperity are built, nourished, and sustained.

“The NBA SPIDEL as you all may know was established by the NBA following approval for its establishment at her NEC meeting held on November 30, 2006, in Bauchi State, and was officially inaugurated on December 19, 2006, by the then President of NBA, Dr. Olisa Agbakoba, SAN, OON, with me appointed as the pioneer Chairman.

“Just like every other body or organization in its infancy, my team and I experienced challenges in designing a structure for the NBA SPIDEL, preaching its vision to members of the Bar, as well as instituting it as a key facet of the NBA. Though enormous, these steps positively impacted the membership and activities of the NBA SPIDEL, and in good time, it rose to reckon within and outside the NBA.

“SPIDEL has come a long way in actualizing the purpose for its establishment. This, in no small measure, was facilitated through conferences, seminars, workshops and several other platforms. All this has set the NBA SPIDEL towards public interest lawyering by which the development of law in Nigeria has been significantly bolstered.

“To the glory of God, the NBA SPIDEL now has an office in Abuja. This is to further encourage the commitment of the NBA SPIDEL in continuing to be at the forefront in the fight for justice and the development of law in Nigeria.

“As many may already be aware, I had donated two office spaces to SPIDEL, with all complimentary facilities, in the year 2019 with effect from 1st November 2019 during the tenure of Dr. Paul Ananaba, SAN as Chairman, but SPIDEL did not take over and occupy the spaces at the time. These office spaces lay fallow and unutilized until one of them was donated to an organization – Vox Populi Foundation. Now that SPIDEL is ready to commence operations from the office, the second office space will be vacated by Vox Populi Foundation next year and additionally handed over to SPIDEL to enlarge the current office.

“The office space is one that can be used ex-gratia for as long as the NBA SPIDEL has the need for it. In addition to this, the NBA SPIDEL will have access to our S.M.A Belgore Conference Hall on the ground floor which has over 300 sitting capacity; Chief F.R.A Williams SAN Board Room on the 3rd Floor; our eatery – U.M. Jawur Lounge (The Dome) on the 1st floor, Hon Justice M.L. Uwais GCON, CJN (RTD) Library on the 1st floor; HON Justice Niki Tobi Moot Court on the 4th floor; Pent Floor Terrace for social events and our spacious parking lot,” Gadzama, SAN added.

“He gave us this office when we didn’t know the value, but known to him. We had nothing but today we have made progress and I believe that Section has come to stay”.

The Chairman, Dr. Monday Ubani, speaking with TheNigerialawyer, during the interview session, he said SPIDEL, which is the third Section in the NBA, deals with the interest of the public and on the other hand, is a development of law. 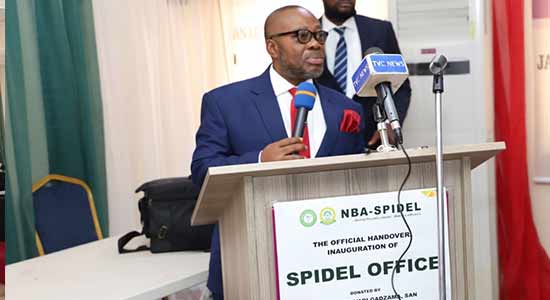 “Development of law is using the law to drive economic development in the country. There must be a proper legal framework that drives economic development. While most times we have problems in the country is because of wrong laws that do not have proper built-in terms of quality thinking that goes into lawmaking. So we created this particular section in order to handle the public.

Speaking on the new office given to SPIDEL, MOU, noted that accommodation is very important for human existence.

“Accommodation is the key. Having a place where we can have Institutional memory, meetings, plans is paramount.

“We are pleasantly surprised when the Pioneer Chairman offered us this place.

“You can see for yourself the facilities in place which include Boardroom, Library and E-library, relaxation room and the rest.

“We are indeed grateful. SPIDEL was almost dead when Prof. Ananaba restored it and handed it over me.

“We will continue from where he stopped. We will make sure SPIDEL becomes a section that every lawyer in the country will crave to join,” Dr. Ubani added. 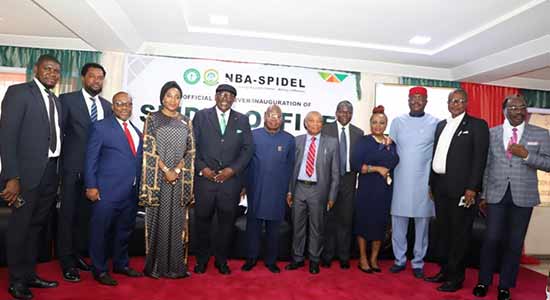