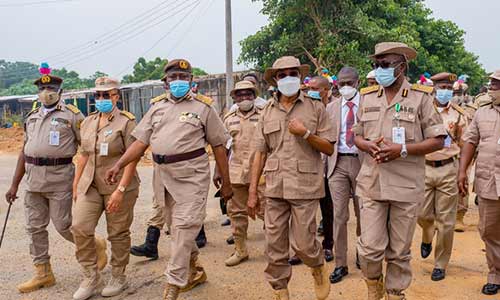 The Minister of Interior, Rauf Aregbesola, has said due process will be followed in the appointment of the new Comptroller General of Immigration.

Aregbesola disclosed this while speaking at the Pulling Out Parade of the 16th Comptroller-General of Immigration at the NIS headquarters’ Parade Ground, on Monday.

“The process of selecting the new CG is not arbitrary. It is following a due process and that is why somebody is standing in for that process to be completed.”

“We must commend the President for allowing due process and not just arbitrary impunity”, he said.

Babandede was due for retirement last year September but his tenure was extended by a year.

Speaking at the Pulling Out Parade, Aregbesola said Babandede was one of the people who made his job as a minister less challenging.

He said Babandede’s wealth of experience in all aspects of immigration helped him to implement the president’s policies in the ministry.

While commending Babandede, the minister urged his successor to sustain the feats of the outgone CG.

Babandede, who was appointed the Comptroller General of the NIS on the 15th of May 2016, took over from Martin Kure Abeshi.