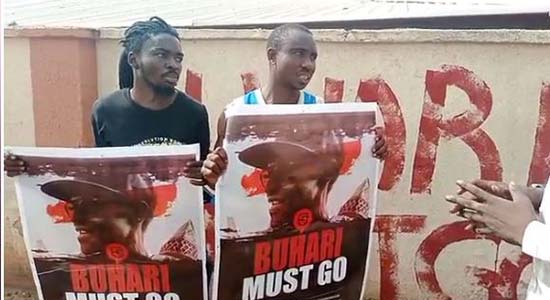 Anene Victor and Emmanuel Larry, two men who were arrested for protesting against President Muhammadu Buhari in Kogi, have been secretly arraigned before a magistrate court in Lokoja, the state capital.

In a viral video on Monday, the duo, who were holding “Buhari must go” posters, were seen being flogged by youths for their demonstration.

Benjamin Omeiza, lawyer to the two men, who spoke with TheCable on Friday, said his clients were arraigned on Tuesday at the magistrate court 1, Lokoja (popularly called Lugard court), on charges bordering on treasonable felony and inciting public unrest.

Omeiza said the magistrate had signed a remand order in his office owing to the nationwide strike by the Judicial Staff Union of Nigeria (JUSUN).

“One of the police officers at the A Division reliably informed me that they were taken and arraigned before a magistrate in his office who signed a remand warrant,” he said.

“At a time when the judiciary is on strike, a magistrate is entertaining a case he has no jurisdiction over and then remanding suspects over a bailable allegation.”

Aggrieved, the lawyer said he tried to get in contact with the Kogi state commissioner of police, but was later directed to see the officer in charge of the legal department at the command headquarters.

“I registered my grievances before her and she confirmed that they were remanded on Tuesday,” the lawyer said.

“When I asked of the name of the magistrate before whom my clients were arraigned, she said she didn’t have that information for me.

“I asked for the next adjourned date and the case file of my clients, but she said she didn’t have that information and that if I need them, I should go to the correctional centre and ask my clients.

“On Thursday, some group of activists went to the correctional facility and confirmed that the accused persons were in detention.”

He said his clients also confirmed to them that they were arraigned in the office of a magistrate.

He added that Femi Falana, human rights lawyer to whom he had submitted his report, also confirmed from the police commissioner that the two men are in prison custody.