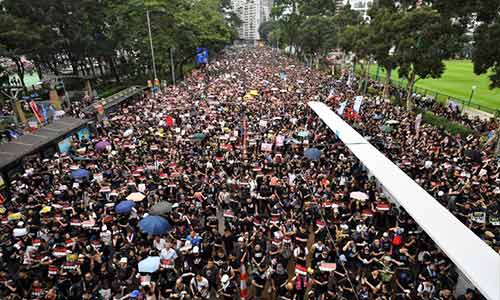 *Hundreds of thousands fill streets in march against extradition bill and call for it and chief executive to go.

Hong Kong – Hundreds of thousands of protesters have marched on Sunday in opposition to the government and a controversial bill, despite the city’s leader, Carrie Lam, shelving the proposal indefinitely a day earlier.

Crowds filled Hong Kong’s Victoria Park early on Sunday afternoon, filing into orderly zones to wait for their turn to embark on an almost four-kilometre route to Admiralty, a downtown business district.

Protesters were largely frustrated with the way the government and Lam, the chief executive, had handled the bill.

Protest organisers say they have five demands: To have the bill dropped entirely; to release protesters arrested on Wednesday during and following clashes with police; to withdraw the characterisation of Wednesday’s protesters as “rioters”; for the police who used violence to be held accountable and for Lam to step down.

Vehicles honked their horns in support as the first groups, largely black-shirted and peaceful, completed the march at the city’s Central Government Offices (CGO) complex.

Tens of thousands had waited patiently for hours under blue skies and a baking hot sun as the crowds shuffled slowly out of the staging venue. The city’s subway system was mobbed with crowds still looking to get to the start, hours after the first marchers had departed.

At the end of the route, many stopped by a makeshift memorial for a protester, surnamed Leung, who fell to his death on Saturday while hanging a protest banner outside a shopping centre not 500 metres from the CGO complex.

Protesters also paid their respects and took selfies next to the so-called “Lennon Wall,” a relic from the 2014 Occupy protests where thousands of messages of hope and solidarity had been left on colourful post-it notes along a stairwell on the side of a government building.

Almost five years later, new notes of encouragement about the current protests have appeared with the city again in political crisis.

About-face
Lam had completed a stunning turnaround on Saturday, announcing that the unpopular legislation, called the Fugitive Offenders and Mutual Legal Assistance in Criminal Matters Legislation (Amendment) Bill would be mothballed for an indefinite period of time.

That statement came days after she had vowed to push ahead to ratify the bill, despite huge public opposition.

Those marching on Sunday, however, were sceptical of the move, calling it a stalling ploy. Protest organiser Bonnie Leung told journalists that it was “a tactic by the Hong Kong government to relieve pressure” on the embattled chief executive.

Former legislator and pro-democracy activist Lee Cheuk-yan argued that the bill could be “revived any time Carrie Lam wants”.

One protester, a 32-year-old events planner who asked to be identified only by his English name, Keith, told Al Jazeera: “Obviously we’re not happy with Carrie Lam’s decision. Otherwise we wouldn’t be here.”

The protesters ranged in age from schoolchildren to retirees.

One 14-year-old student, who asked to be named by only her English name Hermione, said that Hong Kong’s autonomy is threatened by the law.

“Hong Kong has ‘one country, two systems’,” she said, referring to the distinct set of laws that the territory enjoys. “If the extradition law exists, there is no division any more. Hong Kongers have already lost confidence in China. Hong Kong people are wary of China.”

Controversial law
Critics argue that, if enacted, the bill would cede vital freedoms enjoyed by those living in the territory, undermining the independence of Hong Kong’s legal system and putting citizens and foreign nationals at risk.

It would allow the government to send anyone accused of a serious crime across the border to mainland China, where the justice system is widely perceived as opaque and politically motivated. It reportedly has conviction rates nearing 100 percent.

Opposition to the legislation was so great an estimated one million people demonstrated against it on May 9.

The contentious bill was scheduled for debate last Wednesday, but mass protests around the site of the city’s Legislative Council complex left legislators unable to enter the building and the reading was cancelled.

Those demonstrations turned violent, with police in riot gear taking on protesters with tear gas, pepper spray, water cannon and batons in one of the worst incidents of violence seen in the territory since its return to Chinese sovereignty.

Several people were injured in the clashes, with some protesters reportedly arrested in hospital by police after the demonstrations were quashed.

While the territory is part of China following its return from British rule in 1997, it enjoys a high degree of autonomy from Beijing, thanks to an agreement signed by the outgoing British administration and the Chinese government.

Article 4 of the Basic Law, the de-facto constitution which forms the basis of Hong Kong’s autonomy, promises to “safeguard the rights and freedoms of the residents of the Hong Kong Special Administrative Region and of other persons in the region in accordance with law”.

Part of this autonomy comes in the form of Hong Kong’s independent judiciary, which, critics of the proposed changes argue, would be eroded if Beijing had the right to request that those accused of crimes in the mainland be turned over.

Beijing insists it was not instrumental in the former British territory’s decision to try to change the law, but earlier in the week indicated that it supported the amendment.