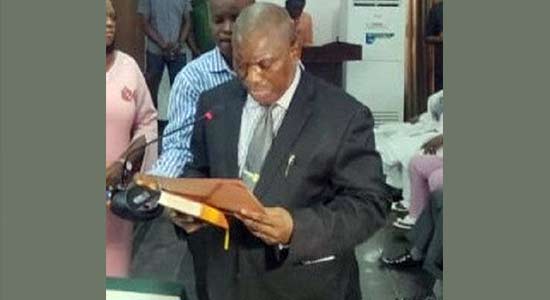 *Urged To Be Honest In Discharging HIS duties

He was sworn in by the Deputy Governor, Chief Edward Onoja, on Tuesday, at the Government House in Lokoja on behalf of the state government.

In his charge to the new acting Chief Judge, the Governor of the State, Alhaji Yahaya Bello, enjoined Justice Otu to stand by the words of the National Anthem by serving with faithfulness, loyalty and honesty.

He told the new head of the judiciary to take the job of taking the other arm of government to the next level by being dedicated to his job and assist the state in its efforts to make a swift administration of justice a top priority.

The Governor who was represented by his Deputy, Chief Edward Onoja, congratulated the new Chief Judge while reiterating his administration’s huge expectations.

“My Lord is now the alter ego of the third arm of government of our administration and therefore one of the chiefest custodians of the administration of justice, law and order in Kogi State and luckily, he is a brilliant legal mind coming in with a massive wealth of experience.”

In his opening address at the occasion, the State Attorney General and Commissioner for Justice, Ibrahim Mohammed Sani (SAN) described the event as the beginning of another era as provided for in the Nigerian Constitution.

In his vote of thanks, the new Chief Judge who appealed for synergy among the three arms of government said the failure of one arm is the failure of all, hence the need for them to work together for the progress and development of the state.

He restated his commitment to ensuring the reform and progress recorded under his predecessor continued for the benefit of the staff and advancement of the State Judiciary.